You are here: Home / Reviews / Scientist, Scientist, Who Do you See?
Click here to go to my disclosure policy.

One of my son’s favourite books when he was little was Brown Bear, Brown Bear, what do you see? Today’s review book is Scientist, Scientist, Who do you see? follows the same format, introducing us to 15 different scientists. The simple rhyming is sure to please both reader and listener.

From the Back Cover:

Full of scientific rhyming fun, Scientist, Scientist, Who Do You See? features appearances by some of the world’s greatest scientists! From Albert Einstein to Marie Curie and Ahmed Zewail, and from Charles Darwin to Chien-Shiung Wu and Grace Hopper… and more!

Scientist, Scientist, Who do you see?
I see Marie Curie in her laboratory!

Young readers will delight at taking a familiar text and poking fun at it all while learning about scientists and how they changed the world. Back matter includes brief biographical information of the featured scientists. This sweet parody is the perfect inspiration for scientists of all ages!

We learn about 11 different scientists in the book starting with Einstein.  Each scientist has a work related image illustrated with them.  For instance Einstein with E=MC2.  It’s what he’s known for eh?

One Scientist leads us to looking at another.  A few of the scientists we see are Einstein, Darwin, Turing and Johnson.   There is a good mix of male and female scientists.  Most of the scientists have a brief explanation of who they are as well.  The reader has a chance to meet scientists who work with geometry, magnets, computers and more.  The drawings are bright giving lots of talking points as you go through each page.  It would be so easy to fill in details for the child to learn.

Before the end of the book the reader is challenged that they too are a scientist.

A final listing of all the scientists is given, which also tells us more about them.  For instance we learn that Grace Hopper was one of the first computer programmers.

The rhyme is familiar though it doesn’t roll of the tongue as easily as the original, which is to be expected.  It’s not as easy to say magnets and electricity as it is to say ‘looking at me’.  🙂   I loved that each rhyme gave a short indicator as to what field the scientist worked it.  This makes it perfect to add to a unit on the different types of science that exist.

I found it great they didn’t focus on people of one gender, nationality or colour, giving wide scope to just who might become the next scientist to be discovered.  Scientists from different eras of history were chosen.  It’s good to have that eh! 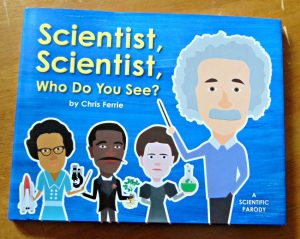 John Locke Philosopher
A Week In Pictures (and words)