In October my son and I went to Kitchener, they were doing a children’s symphony event there.  We went with our homeschool group.

BOY, did the lad and I have fun.

It was a rather neat program, they sent us the music before the program so we knew what music to expect.

No cameras were allowed during the program so I only have this so-so shot while they were warming up.

The conductor did a really good job as introducing each piece and telling the children what to expect from it.

In the hall of the mountain King , oh my how my lad liked this song, and has asked for me to play it again for him more than once.  🙂

The conductor explained that you could hear the fellow creeping into the mountain and having some goblins or something start to sneak up behind them, and then a huge race at the end… would they catch him or would he escape.    My lad LOVES the imagery and the music..ah.. it makes him smile.

They did 10 pieces in all, each time the conductor gave some explanation of the piece and gave the students something to listen for.   Sometimes he provided imagery, other times he asked what emotion the piece asked or demanded of them, and so forth.  All the different ways the music tells a story were explained and demonstrated.

If you ever have a chance to go to a Children’s lesson time at the orchestra, do so.  You’ll learn much and be able to watch your children’s faces light up with joy.

Recently my family was treated to the King’s package at Medieval Times.   My son brought along a friend as we took the time for the royal fanfare courtesy of Medieval Times.  This is our review.  🙂

Medieval Times graciously offered us the King’s Package.   This comes with:

Gramma, son, friend of son, myself and my husband attended.   We made sure we got there in plenty of time so that we could see and hear all they had to offer in the preshow arena.   When one is in the greeting area, you are surrounded by various shields and crests.

You are handed a card, which will signify your hat colour, and part of the Royal Package you get to have your picture taken with the king.

Your hat colour also signifies your table colour and whereabouts you will be seated.   Being at green table three means we were sitting ring side, closest to the action, with the knight who.. as it turned out.. was the King’s Champion of the day.

Before we actually got into the show though, they have an area set up with shops and people wandering around dressed in period clothing.   The boys were able to meet the King’s Falconer where they learned she was hooded, not because she wouldn’t stay with him, but because there were a couple of service dogs roaming around and she was not fond of dogs at all.

And there were shops.  All manned by people dressed in period clothing.  There was a bar set up in the middle of the floor and town crier who called out birthday greetings, and announced which tables would get to go in next.

The lad was mightily tempted to by a sword for himself and his friend but found them simply out of his price range.   Eventually the temptation subsided as we found ourselves going into our sitting area.  And here we all are.  🙂   Ready for an evening of food and fun.

And it was GOOD food.  Soup, bread, chicken, corn, potato, limitless drinks (pop etc).   The only thing I didn’t like was the tea post meal which was MUCH too strong for my taste.

Before the main show there were smaller shows, the falcon flew and caught her lure, the horses strutted their stuff.. Gramma just LOVED this part.

Then the main show began with the knights performing their skills.   I have to tell you this.. there were a group of eight year old boys celebrating a birthday.. and my.. they hooted and hollered and had SO MUCH fun.   YEAH!!!!   Green Knight YOU ROCK!     And booing and hissing when the bad guy appeared.   “YOU SUCK!!!   YOU ARE THE BAD MAN!!!!”    They were so totally into the show it added that extra bit of enjoyment to the show.   Though I have to admit, the mom with them looked a bit shell shocked!  🙂

The show was a lot of fun, even though we had seen it last year, the joy and the wonder and the fun were still there for my lad with plans for next year!   MOM!!!   Do you think next year I should wear my knights costume?    Wouldn’t that be fun?

I said “Sure Lad, but let’s see if they invite us back next year too!”

Here are some pics of the fun we had.

And action.   Men were called upon.  Will you defend the honour of the realm?   Fight to protect the throne and the Princess?   Jousting, combat, sparks flew as weapons hit.

Currently we are listening to a series of books called “The Ranger’s Apprentice”. (Excellent series by the by.. get your boys to listen to it.. your girls too!)  🙂   It is set during this time period, when we saw the flail at work against the sword, it brought to life the danger one of the characters was in when he was faced up against the flail.  The reach it gives to the person bearing it and the thud it made against a shield.   Made it all more real you know?   Even though we know the show is carefully choreographed so no one gets hurt, it still brings the thrill and the danger immediately to bear.

And so, the kingdom was protected.
And all was good in the land.
By the end of the show my son’s friend said “I am so tired, but I am so glad that I came.”
Did you know that you too can go to see Medieval Times?
You can.
The prices in Canada are as follows:

You can pick up these additional packages:

Did you know that Medieval Times, Toronto received an award last year?

If you want to have a great meal (using your fingers), great service and excellent entertainment, do check Medieval Times.   It is well worth your time to attend.     HAVE FUN!

In world history we learned about bog men. It’s amazing, most folks they have found in bogs have been murdered.

this is the tollund man (found in Denmark). 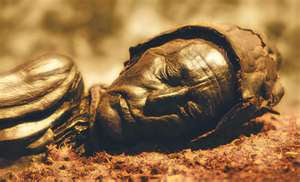 then we went upstairs and did some workbooks.

He also did three dot to dots out of the My Heavenly Helper book.

Finished off another workbook completely. 🙂 Then practiced matching numbers with their words. This was hard for the lad, but it’s a work in progress. 🙂

We finished them at 1125 and then packed ourselves into the car to go to AppleLand with some other homeschoolers.

We had an enjoyable time. 🙂

We got bogged down looking for pics so decided to do a short cut and just look for pics online, which led to me being reminded about the Butterfly Conservancy homeschool thing this afternoon…. SO….RUSH RUSH RUSH but we got there 3 minutes early. The lad had a hoot. 🙂

He fell asleep on the way home.

Jenn who ran the program suggested Journey North for more information on the Monarch. Here’s the link to the Cambridge Butterfly Conservatory. The lad was quite intrigued by the birds that ran around the butterfly house. He even helped to tag a butterfly. Our Butterfly is NAW 325. We’ll be able to look in the spring at Monarch Watch to see if he (yes it’s a male) made it all the way to Mexico for the winter. Mind…that all depends if anyone finds him and his tag. 🙂

Yesterday we went to the St. Mary’s Museum with a part of our homeschool group HOPE.

We learned about the toys that children used to play with.

We learned they played with marbles “Ring Taw”, slappers (metal toys that made noise), corn husks dolls, wooden dogs, thumatrope, and zoetropes. Hoops and graces were another game. These games often had the side benefit of teaching important skills of hand-eye coordination, body-eye coordination and so forth. Skills important to survival. Tops was also a game they used to play.

They also had these really neat wind-up toys that were a big hit with the children.

The children all had a chance to make their own thumatrope.

We had fun today.

The lad had a hoot. We went because of the Titanic display. The lad loved the iceberg! Did you know that salt water icebergs are colder than freshwater ones? Me neither.. it was just one of the interesting facts given to us at this display.

We toured the rest of the museum, even laying of bed of nails. The water table was a place of fun and observations. But the heat sensor was the highlight. It was a machine of some sort that showed the temperature of your body. It was interesting to see.