You are here: Home / Homeschooling / Seeking After Truth : Thomas Hobbes
Click here to go to my disclosure policy.

Thomas Hobbes was orphaned in infancy and taken in by a wealthy uncle.  Through the generosity of his uncle he received a good education, which in turn offered him a chance to travel.  He is perhaps best known for his political philosophies but he wrote on a wide range of subjects, included his philosophy of physicalism. 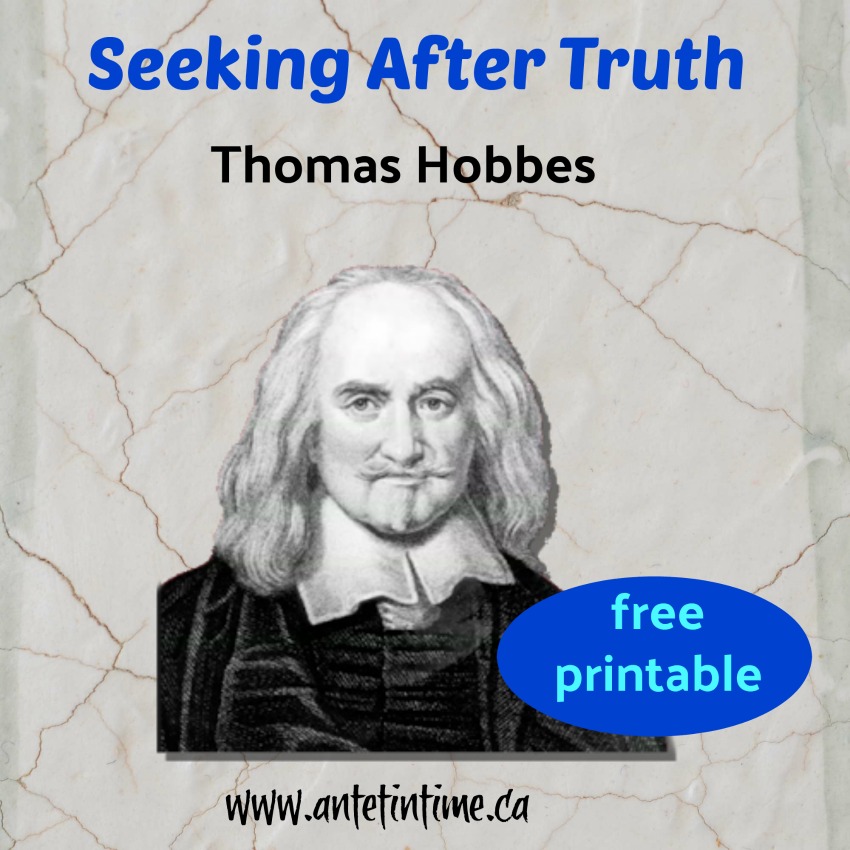 Thomas Hobbes thought that people and animals were nothing more than flesh and blood machines. He lived in a time when great advances were being made in the physical sciences.

A rough outline of his progression in thought goes as follows

Nothing with substance can exist
So everything is the universe is physical
A human being is therefore entirely physical
Therefore man is a machine.

Using science and mathematics he thought was the perfect counter for scholastic philosophy so predominant in medieval times.  He saw no real need to balance the physical and the spiritual.  He saw zero limits to what science could achieve. Therefore saw the whole world as being physical having length, breadth and depth.  EVERYTHING in the universe was physical and nothing more.  He did believe in invisible spirits but still believed that just because we couldn’t see them didn’t mean they didn’t have length, breadth and depth.   He saw these spirits as moving through the body in a similar way we would view the nervous system today.

The only differentiation he made was to God.  He believed that ONLY God could be described as an incorporeal being.   God’s divinity is something that a physical human being could never fathom.   Science and matters of faith were divergent and therefore God will always be beyond our comprehension.

Hobbes never dealt with how the mind works or affects these physical only beings. He believed that in time science would explain this aspect of our physical beings.   He had a strong insistence that everything could be explained in the physical and in the end man is nothing but a machine.

Understanding the time that Hobbes lived in helps me to understand his philosophy regarding people.  Living a time when physical science was making great strides, it is easy to see why he believed that man was merely a physical machine and believed that eventually everything about us could be explained in a scientific manner.

I see how he separated out God from the physical and made it very clear that God was different than all physical beings.  God was incorporeal and it’s not possible for human beings to understand him. I see much truth in this understanding because honestly, can we, as sinful beings ever truly understand God?  I just don’t see God as being as totally non-understandable as Hobbes makes him out to be. God’s word teaches us about God, and the example that Jesus set and how he lived, showed us God as well. The seeing God as different than everything else in the world is a pivotal thought that we often really fail to understand.

Others in the series
Francis Bacon.