You are here: Home / Uncategorized / Anguish and God’s Choice
Click here to go to my disclosure policy. 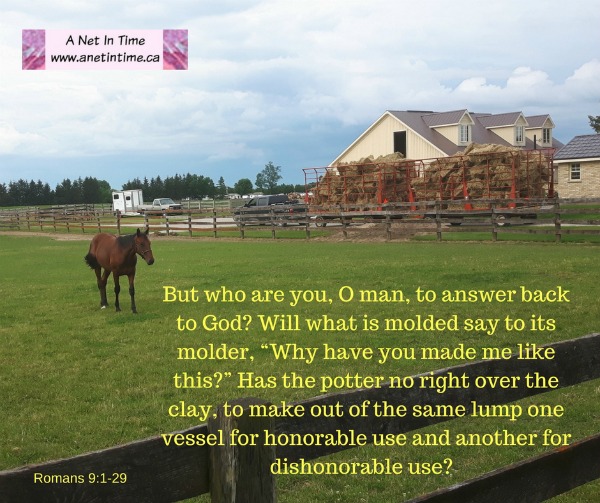 I am speaking the truth in Christ—I am not lying; my conscience bears me witness in the Holy Spirit— 2 that I have great sorrow and unceasing anguish in my heart. 3 For I could wish that I myself were accursed and cut off from Christ for the sake of my brothers, my kinsmen according to the flesh. 4 They are Israelites, and to them belong the adoption, the glory, the covenants, the giving of the law, the worship, and the promises. 5 To them belong the patriarchs, and from their race, according to the flesh, is the Christ, who is God over all, blessed forever. Amen.

Paul says a hard thing here.  One that I had to read twice to make sure I understood.  He would rather he be cut off from Christ if only his brothers, the other Israelites, could come to know the Lord God.  Can you imagine?  They have it all, according to the flesh, all the history of being God’s people.   All the law, the worship, the promises.. all theirs. All according the flesh that is.  But he longs, so much, so much that he’d give up his own salvation if they would be more than that.  If they would only become spiritual children of God.

Why is this hard?
Seriously … I don’t know that I want people to be saved so much that I would be willing to put my own salvation up for grabs.   Do you?  Would you?   Do you have that deep set desire within you that all may come to truly know the Lord God?

THAT is the heart of a true evangelist, the true seeker after God’s own heart, do so want others to know the blessings of being a spiritual child of God.

9 For this is what the promise said: “About this time next year I will return, and Sarah shall have a son.” 10 And not only so, but also when Rebekah had conceived children by one man, our forefather Isaac, 11 though
they were not yet born and had done nothing either good or bad—in order
that God’s purpose of election might continue, not because of works but
because of him who calls— 12 she was told, “The older will serve the younger.” 13 As it is written, “Jacob I loved, but Esau I hated.”
Do you remember that promise the God made to Abraham..about Sarah having a baby and how Abraham needed to believe that promise?  And then Rebekah needing to believe and understand that the older child would serve the younger even when it didn’t make sense?   How of the two boys Jacob and Esau God chose to love the one and hate the other.

14 What shall we say then? Is there injustice on God’s part? By no means! 15 For he says to Moses, “I will have mercy on whom I have mercy, and I will have compassion on whom I have compassion.” 16 So then it depends not on human will or exertion, but on God, who has mercy.
Do you not see Paul’s point?  As much as he would give up his salvation if it would turn the Israelite’s into true children of God it’s NOT in Paul’s hands to do so.  It’s all on God.  It’s ALL on God.  Think on that.

I look at my boy and how I see his faith developing, and my prayer is that he will serve God as an adult.  I don’t want to the pain that some many believing parents have in their children not following the Lord God.   But it’s not on me.   Do you see it, that.. it’s not on you.   As long as I am, as long as you are, serving the Lord faithfully, it’s ALL on God.  It’s his choice to whom he shows mercy and compassion to.  His choice who becomes a true spiritual child.

17 For the Scripture says to Pharaoh, “For
this very purpose I have raised you up, that I might show my power in
you, and that my name might be proclaimed in all the earth.” 18 So then he has mercy on whomever he wills, and he hardens whomever he wills.
God will harden the hearts of some, and others he won’t.  It’s a hard thing though.  To know that God will harden the hearts of some.  It is.  To know that nothing I can do will change what God has determined in that regard.

19 You will say to me then, “Why does he still find fault? For who can resist his will?” 20 But who are you, O man, to answer back to God? Will what is molded say to its molder, “Why have you made me like this?” 21 Has the potter no right over the clay, to make out of the same lump one vessel for honorable use and another for dishonorable use?
So Paul puts it in a practical manner. If a potter molds a piece of clay to be a pipe, and another piece of clay to be a bowl, and other to be a toilet…. is that not the potter’s choice?  It’s his clay and his molding.  So it is with God.  He molds us.  Who are we to complain?  He brought us into being in the first place.  So if he wants me to be a quiet, housewife with bad feet and questioning spirit….why should I be jealous of others?  I’ve no right to be. I NEED to trust my master’s, my builder’s judgement.

22 What if God, desiring to show his wrath and to make known his power, has endured with much patience vessels of wrath prepared for destruction, 23 in order to make known the riches of his glory for vessels of mercy, which he has prepared beforehand for glory— 24 even us whom he has called, not from the Jews only but also from the Gentiles? 25 As indeed he says in Hosea,

“Those who were not my people I will call ‘my people,’
and her who was not beloved I will call ‘beloved.’”
26 “And in the very place where it was said to them, ‘You are not my people,’
there they will be called ‘sons of the living God.’”
27 And Isaiah cries out concerning Israel: “Though the number of the sons of Israel be as the sand of the sea, only a remnant of them will be saved, 28 for the Lord will carry out his sentence upon the earth fully and without delay.” 29 And as Isaiah predicted,
“If the Lord of hosts had not left us offspring,
we would have been like Sodom
and become like Gomorrah.”

I keep reading vs 22-29 and I can’t make my thoughts come out clearly.  It’s all jumbled together in my head. So bear with me here for a bit and if I’m misunderstanding, let me know okay?   So we have God.  Our creator, designer, builder, molder.  This is a God who we’ve seen angry, who we’ve seen exercise his power and show his wrath.  We’ve seen.  Earth swallowing people whole. others dropping down dead etc.   Don’t provoke him.

But suppose this very God wants to make known the riches of his glory and his method for doing so is to choose weak vessels..  And so he chooses people not only the Jews, but also from the Gentiles.  Suppose that’s why he says to come “you are my people” and to others “you are not my people”.    Suppose that eh?

That I am one of his weak vessels and that somehow through me .. God’s glory will be seen.  Oh.. for some reason that thought makes me weep.  (sorry)… God..showcasing his glory through me?   Could it really be?

I don’t know if I see that.
Do you see it in yourself?   God showcasing his glory in you?
If so how.   What do you think people see when they look at you.  Can they see God at work?  I hope they can when they look at me… but I often don’t really think so.

So .. what say you?   If you want to study Romans with me, here is the rest of the series.

©2006-2017 A Net In Time. All rights reserved. All text, photographs, artwork, and other content may not be reproduced or transmitted in any form without the written consent of the author. A Net In Time . We are a participant in the Amazon Services LLC Associates Program, an affiliate advertising program designed to provide a means for us to earn fees by linking to Amazon.com and affiliated sites