You are here: Home / Faith / Another Letter

We know from meeting last time that the opposition had succeeded in getting the work stopped.   Today in Ezra 5 we discover what happens next.

First up we learn who the prophets were of the day.  Haggai and Zechariah (descendant of Iddo).  They prophesied to the Jews in Judah and Jerusalem and stayed among them supporting them.  Zerubbabel and J0shua were the leaders of the people, and they set them back to work to rebuild God’s house in Jerusalem.

The rebuilding caught the attention of the local governor and his people, so they asked “Who authorized you to rebuild the temple?”   And then get this line: But the eye of their God was watching over the elders of the Jews, and they were not stopped until a report could go to Darius and his written reply be received.

Isn’t that cool?   God’s eyes were on his people, minding them.  They continued doing their building until they would hear back from King Darius. 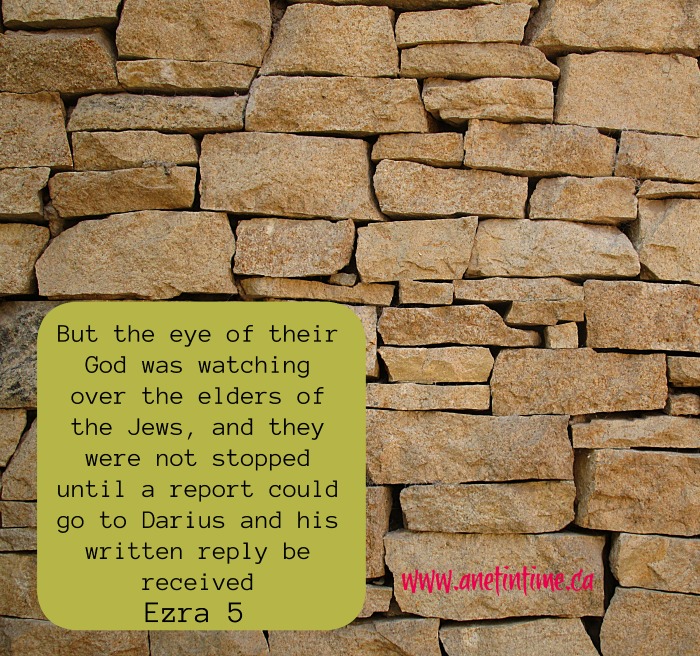 A letter was sent

by the governor Tattenai to King Darius.   Very much a report so that the King would have all the information he needed.

8 The king should know that we went to the district of Judah, to the temple of the great God. The people are building it with large stones and placing the timbers in the walls. The work is being carried on with diligence and is making rapid progress under their direction.

9 We questioned the elders and asked them, “Who authorized you to rebuild this temple and to finish it?” 10 We also asked them their names, so that we could write down the names of their leaders for your information.

This is the answer they gave us:

“We are the servants of the God of heaven and earth, and we are rebuilding the temple that was built many years ago, one that a great king of Israel built and finished. 12 But because our ancestors angered the God of heaven, he gave them into the hands of Nebuchadnezzar the Chaldean, king of Babylon, who destroyed this temple and deported the people to Babylon.   Do you see how they admitted whose they were?   Servants of God!   They also admitted their guilt and subsequent punishment.

Then they gave the particulars of how they came to be rebuilding the temple.  Orders of King Cyrus.

Last came the request: Now if it pleases the king, let a search be made in the royal archives of Babylon to see if King Cyrus did in fact issue a decree to rebuild this house of God in Jerusalem. Then let the king send us his decision in this matter.

So again we’ll have to wait.  The work will continue, but they still await an answer.  What will King Darius have to say?

I don’t know about you, but I feel gratified that they started the work again.   I wonder if the previous king had died and so they started the work shortly after? That determination eh?  They didn’t give up.  They knew what their task was, and though it was stopped for a while, it started up again as soon as they could.  Now all they have to do is wait for a reply.  They knew the facts, and presented them succinctly to King Darius for his decision making.  In the meantime…the Lord’s work will continue.

Isn’t that the way it should be?  Shouldn’t we be determined to just be about the work that the Lord has set for us…regardless of the circumstances?  Obeying the law as needful, but otherwise, just doing what needs doing.  It’s a good mindset to be in eh?