Remember last week I was supposed to read John 8:12-30 and I broke the passage in half?   We saw Jesus speaking the truth?  Today I’ll finish that passage.

21 So he said to them again, “I am going away, and you will seek me, and you will die in your sin. Where I am going, you cannot come.” 22 So the Jews said, “Will he kill himself, since he says, ‘Where I am going, you cannot come’?” 23 He said to them, “You are from below; I am from above. You are of this world; I am not of this world. 24 I told you that you would die in your sins, for unless you believe that I am he you will die in your sins.” 25 So they said to him, “Who are you?” Jesus said to them, “Just what I have been telling you from the beginning. 26 I have much to say about you and much to judge, but he who sent me is true, and I declare to the world what I have heard from him.” 27 They did not understand that he had been speaking to them about the Father. 28 So Jesus said to them, “When you have lifted up the Son of Man, then you will know that I am he, and that I do nothing on my own authority, but speak just as the Father taught me. 29 And he who sent me is with me. He has not left me alone, for I always do the things that are pleasing to him.” 30 As he was saying these things, many believed in him. 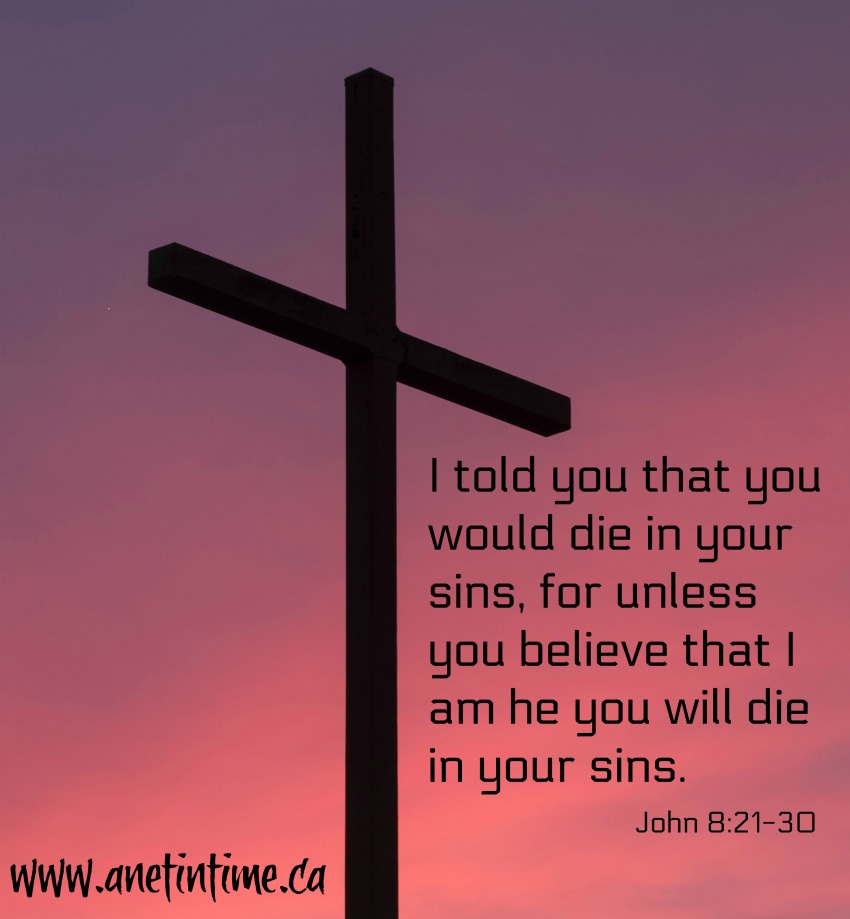 Do you remember Jesus talked to the Pharisees, telling them how his testimony is true, and how God is his Father.  He continues talking with them, telling them how he is going away, they will look for him, and they will die in their sins, unable to go where Jesus will be.

We see him making comparisons, making it clear there are differences between him and them.

Then we see this promise.  You will die in your sins UNLESS you believe in him.  I just loved seeing this line.  Even though the Pharisees called him a liar, mocked him, tested him, scorned him…. Jesus still made that offer to them.  Believe in me, don’t die in your sins.  BELIEVE.

And again they ask “Who are you?”

Jesus let them know that once he was dead (lifted up) then they would understand who he was. “When you have lifted up the Son of Man, then you will know that I am he, and that I do nothing on my own authority, but speak just as the Father taught me. And he who sent me is with me. He has not left me alone, for I always do the things that are pleasing to him.”

I can understand the Pharisees to a certain extent… Not really understanding how this man could claim God as his Father, yet at the same time I wonder why they couldn’t, because many people who listened to him that day believed in him.  Jesus only talked about what God taught him.  Jesus did nothing on his own choosing.  He simply did what he was supposed to, said what he was supposed, and always knew that God was there for him.  Why?   He always did the things that pleased God.

Can you imagine that?  Always doing the things that pleased God.  It just amazes me sometimes the example we have in Christ.  Knowing he only taught what he was taught, only lived as he aught to live, only doing what God wanted him too.  Such a clear and perfect example is he.   I know people cant’ say the same about me.  Wouldn’t it be cool if they could?   To know that I have learned to follow him so clearly that people can see him, can see God in me all the time?   It’s a lofty goal to live for.

Truth Will Set You Free
Knowing You Jesus