You are here: Home / Uncategorized / Carole P. Roman’s cultural, history books for children, a review
Click here to go to my disclosure policy. 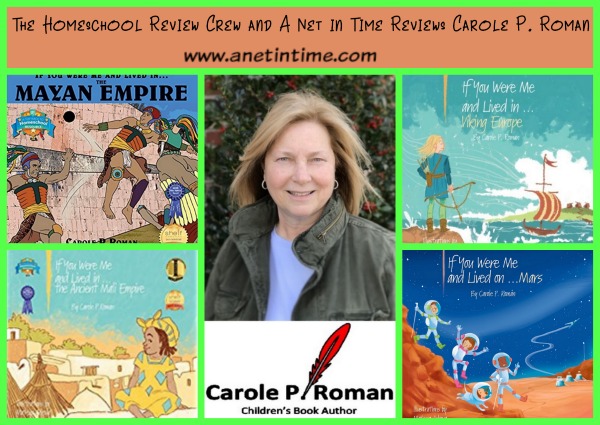 Let me tell you about these books that I received.

If you were me and lived on … Mars is the smallest and easiest of the books I received.  It was, in my and my son’s opinion, a light-hearted read about imagining life on Mars.  From the what you might eat (no spinach yay!) to what the seasons might be like.   This would be wonderful to read alongside a study on Mars, opening up your students imagination to what life on Mars might be like.  It gives some good facts as well as allowing for the dream.

These next three books follow a similar format.  A story that walks you through religious beliefs, schooling, work, society, household makeup and more along with famous names in history, and closing with a glossary.

If you were me and lived in … the Ancient Mali Empire is one of the meatier history books.  This book is laden with facts.   For instance, did you know in Ancient Mali religious beliefs, only the men were allowed to attend funeral services?  Mateya Arkova provides simple water colour illustrations to show the people and their activities. Haggling was the way to do business in the marketplace.   We learned about how they were big in the gold and salt trade.

I have to admit that If you were me and lived in … Viking Europe was not new to us.   I had forgotten that we had downloaded it onto my kindle.  Having the physical book in hand makes it (our our opinion) a nicer read, but the kindle worked well too!  🙂  Did you know in Viking Europe that fish would make up a great portion of your diet?  Dagmal is how you would say the first meal of the day.   Watercolours by Mateya Arkova illumine the pages of this book as well.   The pictures help tell the story so well.

If you were me and lived in … The Mayan Empire. The illustrations here were provided by Paula Tabor and give a different feel to the book. The clean crisp lines went well with the orderliness of the Mayan way of life. Women wore multi-layered clothing of colourful clothes.  Adult men wearing a turban and a loin cloth, adding a cape in cooler weather.   Did you know they produced a highly accurate calendar? They never discovered the advantages of the wheel.   There is as section about how they contributed to the knowledge in the world. 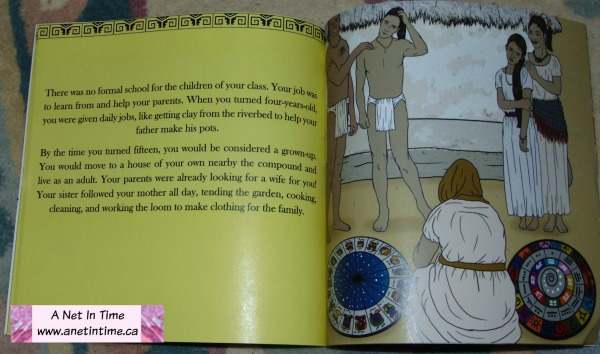 As always they come out in questions: “Mom, you know what I would not want to have on Mars?  FISH.   I would just rather not have fish.  It would cost too much to ship it up there anyways right?”
“Mom, I didn’t know that.”
“I’m glad I’m not a girl..it’s sad they wouldn’t let her go. Why would her religion tell her she couldn’t go to her gramma’s funeral?  That’s not nice”.
“Why wouldn’t that boy want to be a potter even though it’s what his dad does?”

Where can you find these treasures?

100 of us from the Homeschool Review Crew were part of this review, reading a great variety in books.  Please click through here to read them. 🙂

©2006-2017 A Net In Time. All rights reserved. All text, photographs, artwork, and other content may not be reproduced or transmitted in any form without the written consent of the author. A Net In Time . We are a participant in the Amazon Services LLC Associates Program, an affiliate advertising program designed to provide a means for us to earn fees by linking to Amazon.com and affiliated sites

Stand fast, not proud but fearing
How Reviewing Curriculum Works in Real Life