You are here: Home / Homeschooling / Garbage Can Base In
Click here to go to my disclosure policy.

One of the things I’ve longed to do is to build a base for our garbage bins.  We have these big rolling carts which I thoroughly enjoy having.  No more smelly garbage in the house (or having to put it in the freezer in the summer).   I can just bring it outside and be done with it.  HUGE YAY!

Anyways, since we thought we’d be moving eventually I never bothered with my wish to put a base under them (as I’d just have to dig it up again), but since we now own the place it was like.. okay.. NOW we can do this.   I backburnered the idea while I worked on removing the hedge and keeping up with the house over the summer.

The day arrived.  I wanted to use the patio stones from around the back yard bird feeders that we had up.

I raise rabbits and one year I got INUNDATED with rats.  Having the bird feeders didn’t help the problem.  So as much as I hated to do so, I stopped feeding the birds and went on a rat rampage.   The rats were caused to stop hanging around the place but I just haven’t had to nerve to try feeding the birds again, rats and rabbits are SO not a good combination. Rather than feel bad about having empty feeders up I decided it time for them to go.  The lad was a good help.

We took the stones (well only three of them) from around the bird feeders and brought them around front where the lad dug out an area for them to go.  I helped him get a straight edge but he did the work.  So pleased I am to have a helpful lad. Anyways, we got the bird feeders out.  I don’t know if you can see it, but they have suffered some damage.

And then into the bin to soak for a while.  We’ll put them into storage for if we ever get rid of the rabbits and decide feeding birds again would be a good thing or not. Or if we decide to sell them, they at least will be in a clean condition.  🙂

To dig out a spot for them we first leveled the ground, tossing the loose stuff under the shrubs, I then brought the wheelbarrow around for loading the better dirt into it.   We’ll use this dirt to fill in the hole from the tiles.

We measured the depth of the tiles and dug the dirt deep enough to hold them well.  I showed my lad how to level the ground as best we could and talked about if we were going to do an important job we’d use sand and gravel as a base, but since this was for the garbage cans we didn’t have to worry about perfection. 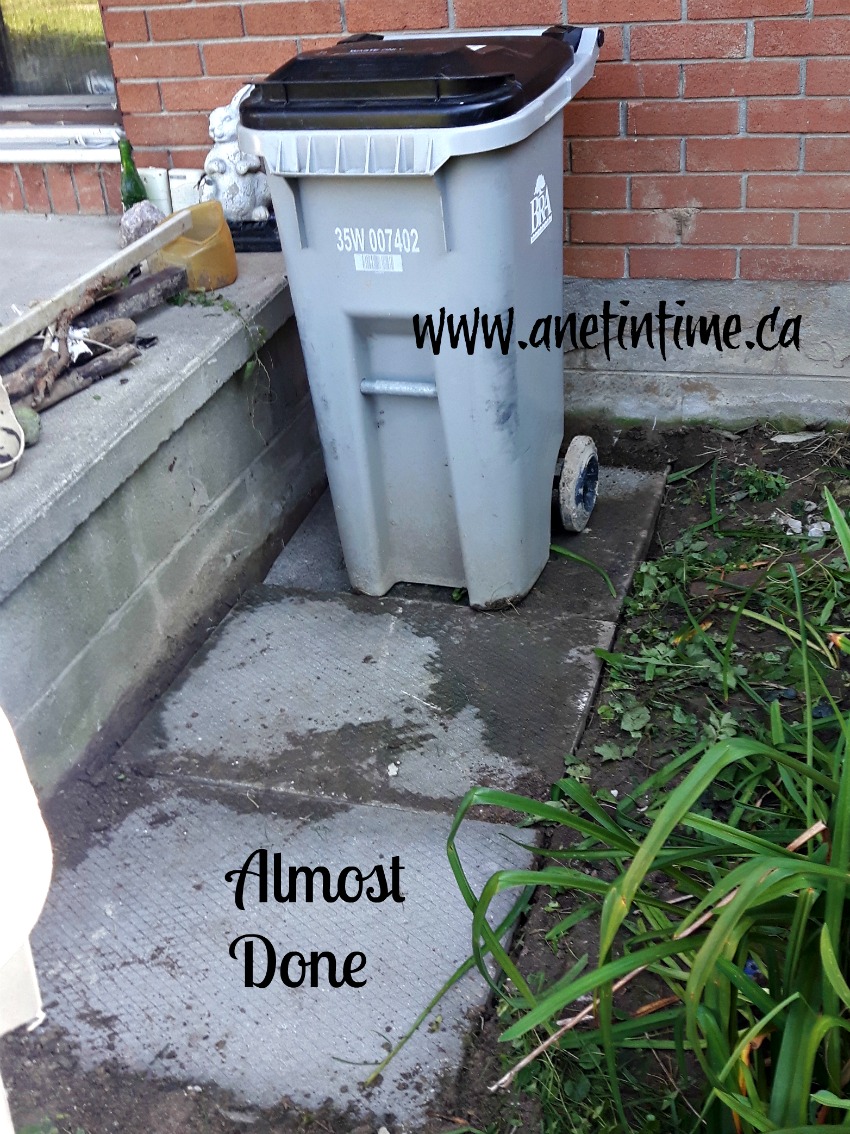 We talked about the differences in shovels, how some have a curved end and others are square, and how the square ones can give you a nice even edge for putting tiles or wood into place.   He seemed surprised at this, so its good learning eh?  See the good job we did making a straight end for the patio stones?   We had to dig the third tile down deeper as it was almost a full inch deeper than the other two.  That had us running into the clay base we have and that was tough digging.

We leveled the tiles by standing on them and shifting back and forth, finding the low points and then adding dirt to them. First the lad, and then me as we weigh different.  This was a good science lesson for the lad and he could see the math application easily.  🙂

We were so pleased to have this job done and a week later it’s still working well!  YAY!!!!