You are here: Home / Faith / Jesus Settles the Disciples
Click here to go to my disclosure policy.

The last time we met we saw how Jesus fed the 5000 men with their families, and then, knowing the hearts of the people, quietly walked away afterwards.  Today we see him walking on the water in John 6:16-21.

16 When evening came, his disciples went down to the sea, 17 got into a boat, and started across the sea to Capernaum. It was now dark, and Jesus had not yet come to them. 18 The sea became rough because a strong wind was blowing. 19 When they had rowed about three or four miles, they saw Jesus walking on the sea and coming near the boat, and they were frightened. 20 But he said to them, “It is I; do not be afraid.” 21 Then they were glad to take him into the boat, and immediately the boat was at the land to which they were going. 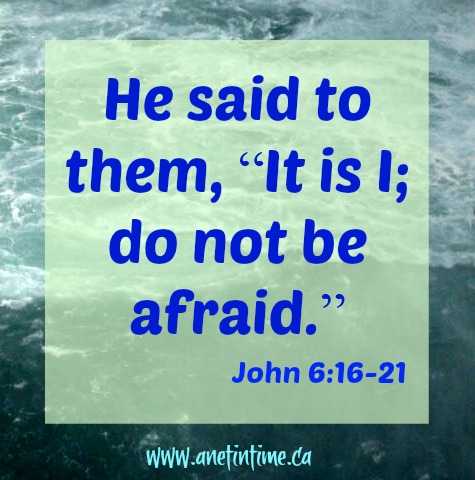 Sometimes I forget this aspect of the story in the feeding of the 5,000.  The crowds response to Jesus was they wanted to force him to be king, but Jesus’ response was to quietly leave. Perceiving then that they were about to come and take him by force to make him king, Jesus withdrew again to the mountain by himself.

I tend to assume, since Jesus went everywhere with his disciples, that they would have noticed his disappearance and headed off to be with him.  But that’s not what the passage says.  It says that he withdrew to the mountain by himself. Jesus left them (the disciples) behind.

He left them collecting the leftover food and that large crowd milling about.  The disciples are left to their own devices, therefore when evening came they knew what to do.  Not hang about on a mountain side all night, they decided to head back to the safety of Capernaum for the night.  They got a boat and headed across the sea.

A strong wind came up making the sea rough.  They were experienced fishermen for the most part though, so I doubt that alarmed them over much.  As they rowed they got to about 3-4 miles out, and I don’t know how they noticed him, but they did.  They saw Jesus approaching them, walking on the water, and it kinda freaked them out. Admittedly I would have been freaked out too, seeing a guy I knew walking on the water.  Knowing there was nothing there except water.. they are almost four miles from land!  Not like there would be stepping stones out that far!   Jesus, oh, do you see how he settles them.  He just says “it is I, do not be afraid”.

It’s makes me think to when my lad was young and something would alarm him and all I’d have to do is say “relax lad, I’m here.  Nothing is going to happen.” The most remarkable thing was … he settled every single time.  He didn’t stand and argue with me, he just settled. The disciples did the same thing.  He said Don’t be afraid, it’s just me and the disciples settled.  They welcomed him into their boat.

NOW GET THIS!  Jesus gets into their boat and “immediately the boat was at the land to which they were going.”  I have no idea of how many times I have read this passage and not really seen this line.  Can you imagine it?  The seas are rough, the men are rowing (and rowing a boat is not for the faint of heart). It’s hard work and when the seas are rough?  Even harder. Jesus gets into the boat and boom…they arrive.  Blows my mind.

Probably did for the disciples to.  Yet another thing to further their faith in him.  First they saw him feed this huge crowd of people, they notice him slip off not wanting to be a king, they see him walk on water, and now suddenly they at the shore line.

Oh.. don’t you just want to be there?  to be able to ask questions of how they thought, to see their surprise and wonder?  I do.  It’s just an amazing thing to me.

I have a hard time you know, looking at my life and being able to point out the amazing things the Lord has done that strengthen my faith in him.   It’s not like I’ve ever seen him walk on water you know?  I have felt him move in the quietness of my heart, I’ve known what I call “God-moments” (when things happen just so you know it’s God at work), I’ve seen answers to prayer.   I suppose that’s why it’s called faith eh?  Cause I can’t always see God, but I know he’s there in the quietness.  He settles my spirit, telling me “it is I, do not be afraid”.  Isn’t it good to hear that?  To have him settle your spirit?   I find it amazing every time it does it.  🙂

Our Work? Belief
We Are God's People