John Locke was a philosopher who lived 1632-1704, and is part of a group called British Empiricists.   According to the Basics of Philosophy site, “British Empiricism is a practical philosophical movement which grew up, largely in Britain, during the Age of Reason and Age of Enlightenment of the 17th and 18th Century. The major figures in the movement were John Locke, George Berkeley and David Hume.“

John Locke grew up well off but not wealthy, his dad was a legal clerk and served in the parliamentary forces during the civil war in England.   He worked a teacher for a while as he studied to become a physician.   He became attached to the household of Lord Ashley and through that he was able to serve in a variety of government posts.  Throughout his life he had a keen interest in medicine and science.

Empiricists believe that everything with we know comes directly or indirectly from the experiences of the world that we acquire through the use of our senses alone.   So if we can’t taste, touch, smell, feel or see it, we can’t truly know it.

They come to this way of thinking by rejecting the rationalist thought that people are born with some ideas and concepts that are innate to who we are.  They look at that and say it’s not borne out in all individuals.  Not ALL truths are found in everyone at birth, and there are no universal truths found in all people of all nationalities and cultures all the time.  ERGO everything we know is gained from the experiences we have in life.

If we attentively consider newborn children, we shall have little reason to think that they bring many ideas into the world with them. John Locke. Click To Tweet

Locke believed that at birth our mind was a Tabula Rasa, a blank tablet upon which life experience is written. He didn’t believe that people had any sort of innate knowledge they were born with.  Everything we know we learn from what we sense and then rationalize into new ideas.  His belief that that you can tell from looking at newborn baby that they have any kind of knowledge, therefore you can’t prove that they do, ergo innate knowledge is not true.  He did think that people have innate capacities … so things that everyone is able to do like reason and perception.  So everyone is able to sense things and then think about them.  But no one is born with innate knowledge. 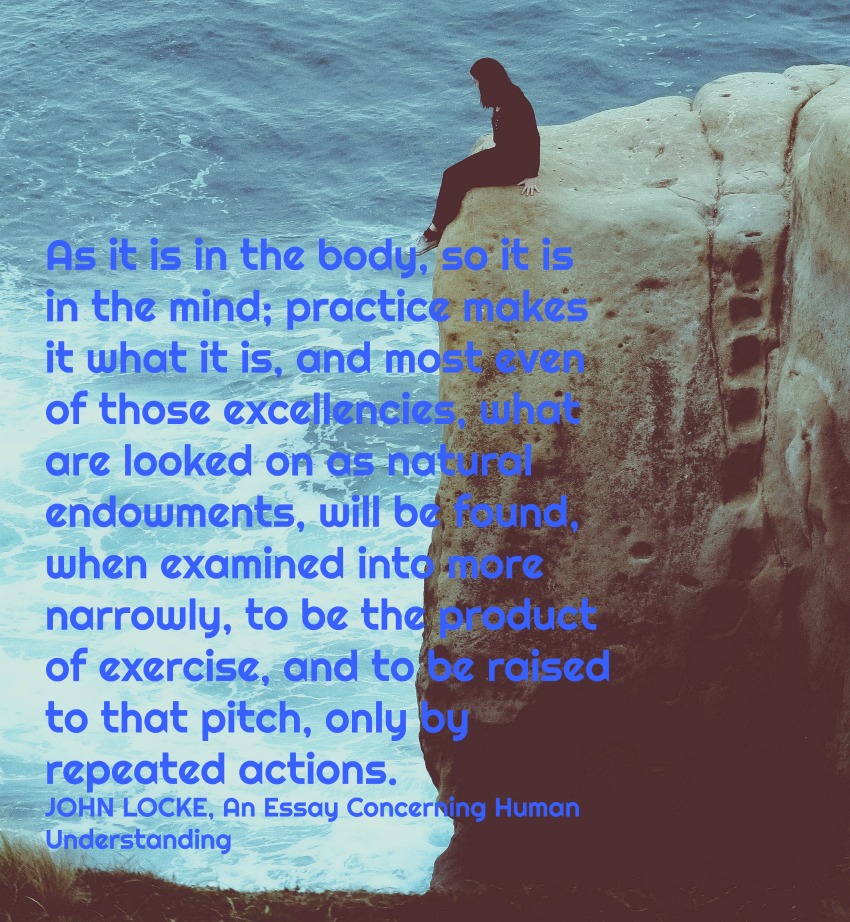 Did he find truth?

I think that John Locke is spot on that people are able to take what they sense around them and turn that sensing, those experiences, into new information.  It’s how we move forward as a people.  Taking knowledge and what we see in the world and forming new thoughts out of that. We build on the knowledge of those who have gone on before us.

Let us then suppose the mind to be white paper, void of all characters, without any ideas, how comes it to be furnished? John Locke Click To Tweet

I was talking with my son about tabula rasa and he said “that doesn’t make sense mom.  If people are born not knowing anything, how then would a baby know to cry when it is hungry or needs a diaper change?”   I agreed with him that babies do that naturally!

The book of Romans is riddled with references to people knowing the reality of God and that some choose to deny or repress that knowledge.  Just because people do that doesn’t mean that God doesn’t exist and that on some level every single person knows that.  Sometimes it gets changed to what it shouldn’t be (like in animalism, Hinduism, pantheism etc.) but the knowledge that God exists is something innate to us all.

In Romans 1 we read: For what can be known about God is plain to them, because God has shown it to them. 20 For his invisible attributes, namely, his eternal power and divine nature, have been clearly perceived, ever since the creation of the world, in the things that have been made. So they are without excuse. 21 For although they knew God, they did not honor him as God or give thanks to him, but they became futile in their thinking, and their foolish hearts were darkened.

Want to test your learning?

Eight Tutorials For Making Dolls
Scientist, Scientist, Who Do you See?