Yesterday, God showed his good hand, today we learn of Ezra’s shame and how he responded to it in Ezra 8:21-23.

21 Then I proclaimed a fast there, at the river Ahava, that we might humble ourselves before our God, to seek from him a safe journey for ourselves, our children, and all our goods. 22 For I was ashamed to ask the king for a band of soldiers and horsemen to protect us against the enemy on our way, since we had told the king, “The hand of our God is for good on all who seek him, and the power of his wrath is against all who forsake him.” 23 So we fasted and implored our God for this, and he listened to our entreaty. 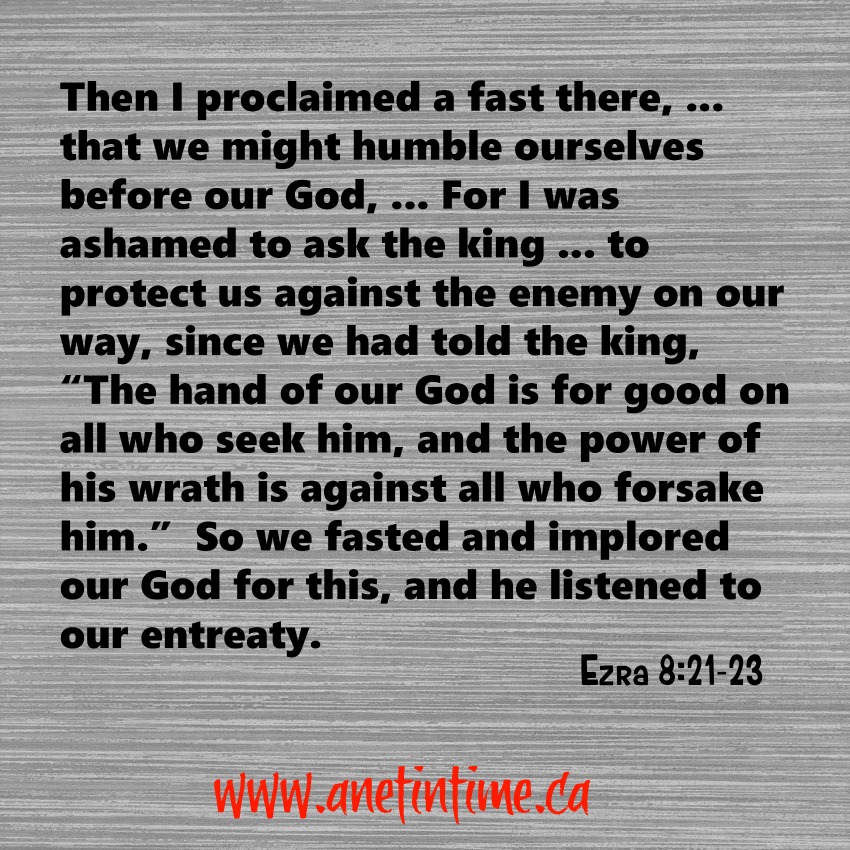 I thought it was neat yesterday when Ezra noticed an appalling lack of Levites in the midst of the people coming with him.   Asked for help, and noted God assistance.   Very cool to read about that.

Now he has the Levites among the people, and the first thing Ezra does is call for a fast. Right there, where they are camping, the Israelites fast.   They fast because they have this need to humble themselves before God.   As they do this they seek from God a safe journey for themselves, their children and all their stuff.

You see Ezra is ashamed that he needed to ask the King for protection for the people as they travelled.  After all, they had told the King that God was there end all and be all.  As in God takes care of those who seek him. And that God’s wrath is real against those who forsake him.

Shame because of his fear eh?   Fear for his people, smallish in number travelling through hostile lands.  So he asked for help.  Help from a king….when he had God on his side.

Therefore Ezra and the people fasted, calling upon the Lord.  Imploring him to help him.  And then read this “he listened to our entreaty“.   Isn’t that awesome?  God listened to them.

Oh, I need to share this story with the lad tomorrow.  He sometimes, (like all of us) fails to see what we should do with shame and guilt. And here Ezra points it out to us right?  He has this shame, he figures out what causes it, and he then turns to God in prayer.  God… he responded.  He heard what they had to say.

I’m sitting here and just thinking… it’s the way it is eh?

We live out our lives, so often minding our interests, doing our thing and then we realize that we aren’t living what we say we believe and that shames us (at least it should) and then we turn to God and tell him about it.  And you know what God does EVERY SINGLE TIME?   He listens to us.   All the time.  To people everywhere who see their shame and turn to him.. he hears them.  He hears me.  He hears you.. oh he hears us.

Doesn’t it just blow your mind?   To think and see and realize just how much God hears us?

Levites Guard the Offerings
The Good Hand of Our God