You are here: Home / Faith / The Shame and Prayer of Ezra
Click here to go to my disclosure policy.

After looking at how the Levites did their job well, today we are looking at Ezra 9 and rather than me copying out the entire text, I thought it’d be good listen to it.  Sometimes in listening to the word of the Lord you hear things differently.   Listen well to Ezra’s prayer.

Do you remember the reason Ezra came?   He was an expert in Mosaic Law and wanted to teach it to the people.  I assume he did so.  I do know he was the leader of the people because the officials came to him with an on-going concern, especially now that all the people were gathered together in Jerusalem.

Their concern. “The people of Israel and the priests and the Levites have not separated themselves from the peoples of the lands with their abominations, from the Canaanites, the Hittites, the Perizzites, the Jebusites, the Ammonites, the Moabites, the Egyptians, and the Amorites. 2 For they have taken some of their daughters to be wives for themselves and for their sons, so that the holy race has mixed itself with the peoples of the lands. And in this faithlessness the hand of the officials and chief men has been foremost.”

The people were not living the separate lives the God told them to live. In fact they were marrying the daughers of people living in the land and allowing their sons to do the same.  This means that God’s holy people were intermingling with people not seen as holy.   Mixing FREELY with them.  Making no distinctions.

Ezra’s response: He was APPALLED.  So appalled in fact that he ripped his clothes, pulled hair from his head and beard and sat down.  He stayed sitting the rest of the day fasting.

When evening came he got and prostrated himself before the Lord and began to pray.

His prayer was one of shame and acknowledgement.   Acknowledging God’s goodness to him and the people.  How God punished them for their sinfulness and now he’s let them come back and establish a place for themselves and his people, his people that he has been so gracious toward are sinning again!  God showed his love for his people and this is what they do!!!!!

I have to admit.  I read those words and I remember in the past thinking…. “Man, how could they be so stupid?  Didn’t they learn anything?”   Now I tend to think… “that’s me.   Going right back to sinning when God has been so gracious and loving toward me.  Yeah.. he corrected that idiotic behaviour of mine and I felt bad and all, promised to change and here I am RIGHT BACK in the midst of this sin of mine.”   I feel and understand Ezra’s shame.   I know that I have sin I need to battle daily.  How often I forsake God’s will for my life in favour of the easy or the immediate.   God only has my good at heart when he says what we way we should follow.   The reason here was given to them “that you may be strong and eat the good of the land and leave it for an inheritance to your children forever.“ 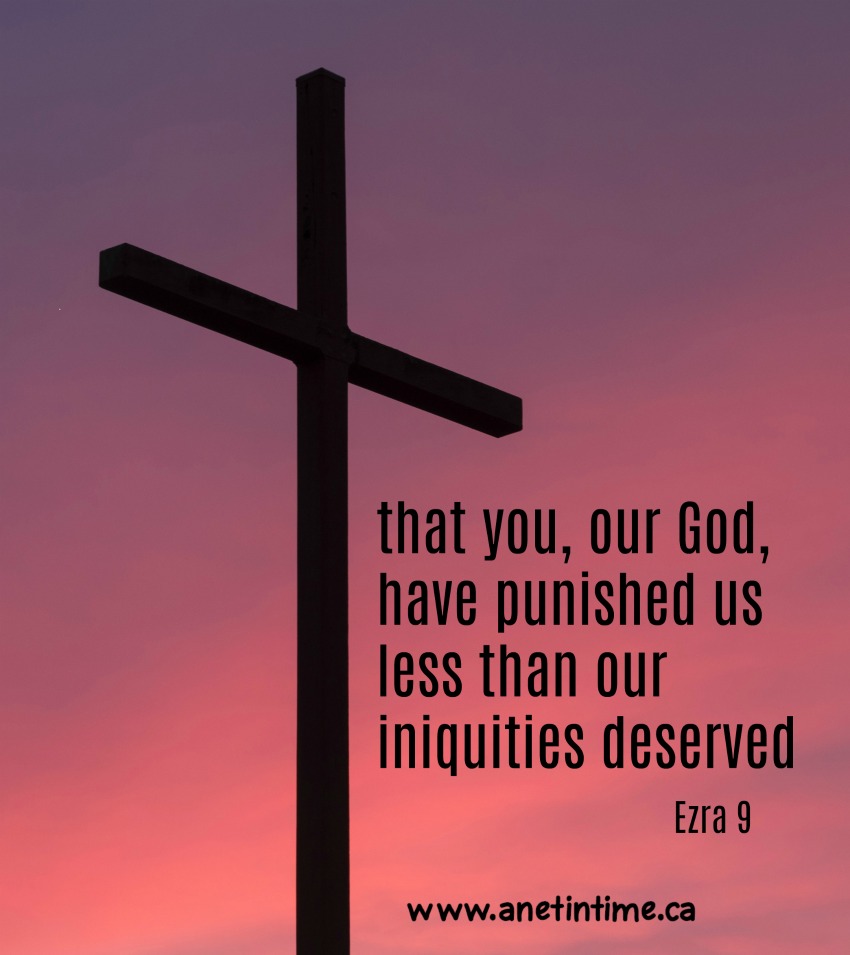 Ezra acknowledges that God hasn’t punished them as much as they deserve:   13 And after all that has come upon us for our evil deeds and for our great guilt, seeing that you, our God, have punished us less than our iniquities deserved and have given us such a remnant as this, 14 shall we break your commandments again and intermarry with the peoples who practice these abominations? Would you not be angry with us until you consumed us, so that there should be no remnant, nor any to escape? 15 O Lord, the God of Israel, you are just, for we are left a remnant that has escaped, as it is today. Behold, we are before you in our guilt, for none can stand before you because of this.”  He also admits how helpless they are to stand before him because of their guilt.

And there we are left.  Not knowing God’s response to Ezra’s prayer.

Left in the guilt and the shame.  Left in the acknowledgement of God’s goodness.  God is so good to us and we sin ALL the time.  It’s not right is it?  The pervasiveness of sin just sets on us doesn’t it?

I am so glad for God’s mercy in the light of who we are as sinners… aren’t you?

Deliberate Action
Be Thou My Vision