homeschooling was put on hold for a bit.

I’ve been ill for the past 3-4 days with a sore throat, fever, coughing, and more.   NOT complaining, just explaining why homeschooling has been back burned a bit.  The lad was “off” yesterday morning as well but went out of the house to play at gramma’s for a bit.  Came back a cheerful lad.   Good for him to get out of the house for a bit I think.

Anyways, was thinking I feel somewhat less muddle-headed this morning so that I should do something schooling related so we played lego and listened to Adventures in Odyssey.   Later we will do some exploring of different websites – Clickschooling sends me almost daily emails so we’ll go through them and see what we can learn and explore from those.  🙂    I’ll link here what we go and look at and hopefully say what we thought about them.  🙂 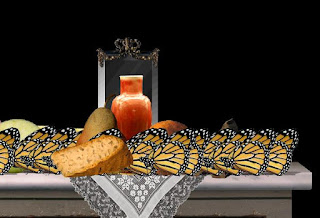 It took some trial and error, but he learned abit about making a still life.   In this pic the monarchs flew in the window (behind the candle holder) and they are eating all the fruit that’s hidden behind them.    Rather a neat idea I think for a six year old.    We then had fun playing around with the 3D twirler.   Then we went to the jungle art page where he created this masterpiece.  I tried hard to save the image but couldn’t for the life of me figure that one out.  So.. anyways, then I totally petered out of energy and had a nice lay down.     I do dislike being ill.

I was awoken from a lovely nap by an apologizing boy child and found him making some physical art.  I’ll need to upload a picture for your enjoyment. 🙂