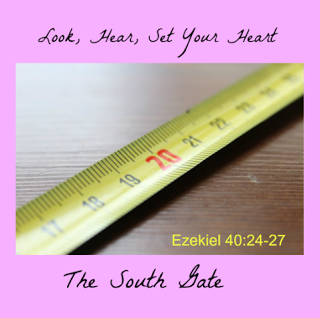 Today we find Ezekiel being led to the south where he finds a gate.  Again, measurements are taken, steps are counted. and see what are one the jambs.

24 And he led me toward the south, and behold, there was a gate on the south. And he measured its jambs and its vestibule; they had the same size as the others. 25 Both it and its vestibule had windows all around, like the windows of the others. Its length was fifty cubits, and its breadth twenty-five cubits. 26 And there were seven steps leading up to it, and its vestibule was before them, and it had palm trees on its jambs, one on either side. 27 And there was a gate on the south of the inner court. And he measured from gate to gate toward the south, a hundred cubits.

The first thing that grabbed my attention when I saw this selection of verses was this.  Ezekiel was led.  In previous instances he was brought, like he had no choice, no ability to move on his own, like when you plunk a chess piece down on a new spot.   But here he was led, one who is led often has to move under their own power.  Granted, when being led, one doesn’t always have the power to deviate from the path, and does need to go where they are being led to, but one is moving under their own power.

It just makes it seem to me… that Ezekiel is being an active participant.  And you know what?   Active participants remember things better.   I know the Lord God will help Ezekiel remember what he must, but I suspect it will be easier to remember details when he’s actually walking from one place to another.  Feeling those seven steps beneath his feet and seeing the palm trees on the jambs.

Just like when we take part in something rather than just reading about it.  What you see and smell and hear and feel is remembered better if you are there to take part in it.

Don’t you?   What do you see in these passages on measuring and noting steps and jambs?

You can read more in my Ezekiel Studies here and here.