Sometimes, in the course of living one’s life with a life partner (aka my darling hubby) you are called upon to do things you REALLY don’t want to do.

THIS is hubby’s thing.  He likes them.  Loves the smell of them and doesn’t mind the tang of their taste in his nose and mouth.

I, on the other hand, very much DO NOT.

But (and mind the shock value) he did this to his finger at work.

This means NO doing up hot peppers as putting on nitrile gloves is a bit of a challenge and not one he’s up to when he doesn’t HAVE to do.   So it fell to me (his long-suffering wife) to do it for him. 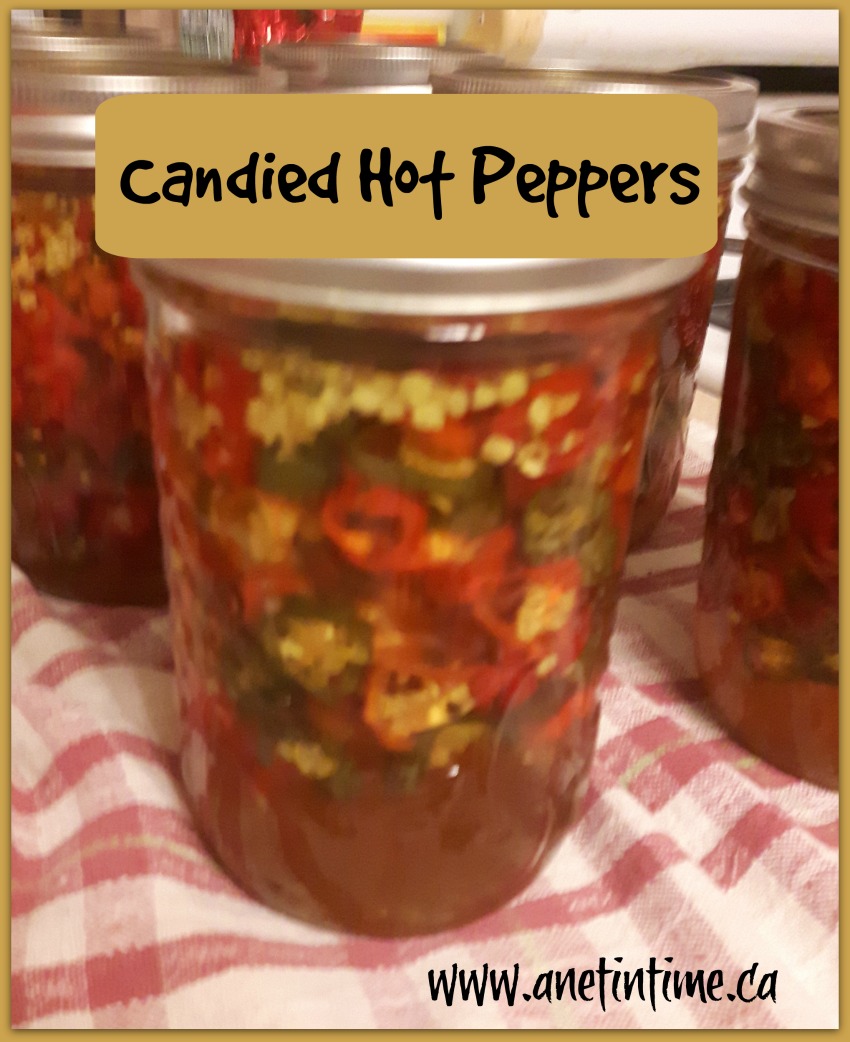 Have I mentioned how much I dislike hot peppers?   I barely stand sweet peppers, but hot peppers are just a No.

BUT I found this recipe for cowboy candy.   I pretty much made it as is except we had no cayenne pepper (guessing you know why that might be).  🙂

So you take your mess of hot peppers, try to have them be firm and nicely ripe.  Wear gloves.  Seriously.. wear them.   Cut off the icky bit (the hard stem) and toss that into your compost. Then slice the good part into even slices about 1/8- 1/4 inch thick.  Cut them about even, but WEAR GLOVES!!!!!!!!!!!!!!!!!   Our mess of peppers consisted of 85% jalepeno peppers 10% hot peppers and 5% we’re not sure of what they were peppers.   The recipe called for three pounds, I had more than that so just jiggled with the recipe a bit.

Once you have them cut set them aside.

In a big pot I put in

Boil that together until the sugar is nicely melted.  Reduce heat and simmer for 5 minutes.

Add the pepper slices and simmer for exactly 4 minutes. I may have messed up this part a bit as I was washing up the jars while it cooked a bit.

Use a slotted spoon to transfer the peppers, loading into clean, sterile canning jars to within 1/4 inch of the upper rim of the jar.
Turn heat up under the pot with the syrup and bring to a full rolling boil. Boil hard for 6 minutes.  (aced this part)
Use a ladle to pour the boiling syrup into the jars over the jalapeno slices. Insert a cooking chopstick to the bottom of the jar two or three times to release any trapped pockets of air. (I didn’t have to do this part as I didn’t pack them very tight) Adjust the level of the syrup if necessary. Wipe the rims of the jars with a clean, damp paper towel and fix on new, two-piece lids to finger-tip tightness.

Then put it through your canner for 10 minutes and let them cool.

The original recipe said to keep the leftover sauce as it’s good over meats and what not.  Hubby dear said “just toss it lovey, and thanks for doing them up for me”.    (wasn’t that nice of him?)

Was it completely horrible?   Well… I survived!   Disliked the cutting and cooking and getting the smell in my nose.  I didn’t mind the canning steps.  AND I loved that my sweetheart then cooked up pizzas for supper.   Box pizza, but still a pain to open with a sore hand, but I didn’t have to cook!  🙂