When I mentioned it to my hubby he said “Hudson Bay or the Hudson Bay Company.”

Since mentioning one without the other doesn’t make a lot of sense to me so I figured doing a profile on Henry Hudson might work just as well.  🙂   He made four sea-faring journeys.

Henry Hudson as was sea-faring explorer back in the 1600’s.   He discovered Hudson Bay but actually thought he had discovered the Pacific Ocean at the time, this during his last voyage of 1610-1611.

He was a rather indecisive leader and his crew talked of mutiny when they sailed into the bay and were stuck there for the winter.   When the ice broke in the spring and all the men wanted to return home to England, Hudson wanted to push on in his search for the North West passage.  His men mutinied, he was put over board in a rowboat along with his son and the injured men, and was never heard from again.

He was known for being an excellent navigator but a poor leader of men.  The men who mutinied against him were not convicted of the crime and found jobs on other boats.

He was a determined explorer.  He found new hunting regions, explored new sections of land and ocean and just at his ultimate quest… to find the NorthWest passage.

Numerous places are named after him.  Hudson Bay led to the Hudson Bay Company.  We have the Hudson River, Hudson Straits, Hudson Stone, Henry Hudson Bridge as well as various schools, streets and the like. 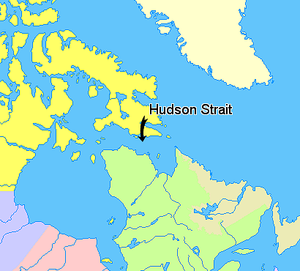 A Net In Time Schooling Blogging Through The Alphabet Grab Button Code: