This week’s assignment due Monday, January 31, 2011:
Sketch something you study in science.

They will be posted next Tuesday at Harmony Art Mom’s site.

We also played an oceans card game.
And practiced writing numbers and letters on a chalk board.

Oh… And we did an experiment inspired by mommy drawing out an experiment we did a while back of how does water and oil affect how things float or sink. When I’m feeling more brain awake I’ll try to write out the experiment and what we found interesting about it.

We had fun just playing as well. Good to do things like that. 🙂

Sketch Tuesday – something made in China.

The lad decided that he should draw a plate and some tea….after all we all know that tea comes from China, and his favourite plates were made in China as well. …they aren’t green (one blue, one red)….but apparently they want to be green. No…I don’t understand it either. 🙂

The tea is the small green drawing in the bottom corner opposite my writing.

Next week it will be put up at Harmony Mom. So stayed tuned. 🙂

This week’s assignment, due Monday, October 11th, 2010:
Sketch something you drink.

Justin’s Something You Drink Picture.
This is Kool-aid (red, his favourite colour), sitting beside the kool-aid is the empty glass drying.

As always, they’ll be published on Tuesday at Harmony Mom Sketch Tuesday’s site.

This week’s assignment. Draw something that begins with “R”

I thought hmmm.. something that begins with R… what in the world can I draw that begins with an R? Rolling pin came to me in church this morning.. and I seriously thought about it… but curves not so good at them… hmmm… okay, let’s continue thinking… I ended up doing a roof. seemed simple enough. Justin’s verdict “pretty good for a beginner”. 🙂 But then he had to finish the rest of the building. 🙂

Justin’s R word.
let me explain this one. I thought he might like to do a picture of a rabbit but I wanted it to be HIS idea, so I started him giving him “R” words. Roof, rat, ribbit, etc (thinking he’d say rabbit). He got captured by the idea of how do you draw a sound? So…he drew the sound waves of a frog saying “ribbit”. 🙂

As always, they’ll be published on Tuesday at Harmony Mom Sketch Tuesday’s site. 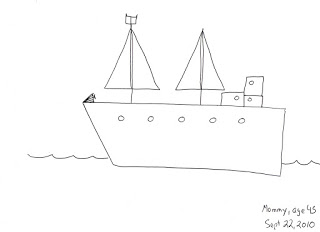 There’s a story to this boat. It is a bunnytown boat. and the bunnies are fishing for cats. Can you see all the cats in the water? they are being fished for. This is a ladder going up to what.. I’m sorry.. I can’t remember. But there is a guard rail so the bunnies can’t fall off the boat.

Justin and I submitted sketches for this weeks Sketch Tuesday. We were to draw something with whiskers. I initially did a picture of “daddy with whiskers”, but on query from my lad, did a face of Milo the cat instead. yes, I am a horrid artist, but hey… at least I submitted something 🙂 Next week…something that floats. Justin was very excited about this one and immediately drew something. 🙂 I am still thinking about what I want to draw for this assignment.

Today we did the first day of the Terrific Tigers Unit study/lapbook from Download N Go. I have a cat crazy lad so spending the $8.00 for this item was a no brainer. He had fun doing the first section. We didn’t do it ALL (as in what day one called for), he’s five and this is a multi-age study. So you have a child who can do some, do what he can, dictate what he can, and leave the rest.

As to the study itself I found that it’s well done. I have to say, I would have no problem getting some of their other products. 🙂 I enjoyed doing the day one of this five day study with him.

I have a fairly electic approach to homeschooling, I see value in doing a variety of things, and having a five year old lad gives me some sway in how I do things. I am hoping to start doing some latin with him at some point….But I think I might leave that in his dad’s purview, his dad is more the language person in this household, though I’ll probably get roped into it…..

What else…today we went to the library to get tiger books…they had ONE (a bit of a bummer that), we had plans to stop in and see one of the seniors in the old folks home, but forgot after playing with trains to do that… went to the dollar store to get a drink instead. but you know what? …tomorrow is another day, always lots to do in the course of a single day.

This is our boy’s first sketch that we’ve submitted to Sketch Tuesdays. 🙂

We were to sketch something that grew on trees.
The Buggy chose to do crabapples. The top one is very mouldy.

We have a crabapple tree out front that my hubby grew from a wee seed. It gets nice crabapples, it also gets a lot of not nice (as the buggy would say, mouldy) crabapples. 🙂

In case you wonder what the black circles are… those are the branches that the Crabapples grow on.