Yesterday we did reading and housecleaning.  We read all our normal books.  Played pirates.  Learned what some valuable things are now-a-days that pirates might want to steal so we’ve been having pirates stealing art!

Today we spent time on Studyladder.       We worked on sight words, blending, using descriptive language, and what not.  In the afternoon we went for a walk at the dam.  We took a different trail than normal and we spent time looking under stones and deadfall to see what type of insects we could find.

We seemed to be plum out of luck in finding anything other than the ordinary ants, earthworms, small black spiders and pill bugs UNTIL we stopped to look at a sign and there we saw an interesting bug which obliged us by staying still long enough to be captured in our insect catcher. 🙂   We want to show the lad who is teaching the bug class during HOPE days tomorrow.

OOH.. we had a LOT of fun watching some water spiders 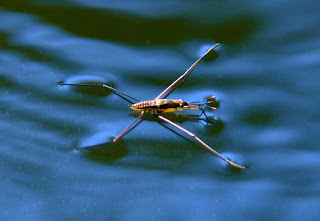 They were sculling back and forth on a stream we came across.  It was the lad who first saw how interesting their shadows were.   The lad had fun experimenting with what he could do to make them come out and play and what would make them go and hide.

We saw a variety of interesting small flowers coming out to bloom.  Trilliums and dog tooth violets, then these funky little yellow ones that made me think of violas but they weren’t, and these white and purple ones that grew together in the same patch.  Haven’t a clue what they are called but they inspired comment.

On an interesting side-note.  Two things have merged in my son’s playtime lately.
One. we read the newspaper together at breakfast.    We talk about the news, we sometimes learn from the news (aka the other day we read two different articles that had to do with genetics and research), and of course we read the comics.
Two. Lego city has a website with games on it.  one of those games is a chance to create your own comic strip using lego characters.  This totally captured his imagination and he had SO much fun with it.

The merger:  OH My but the lad is having fun creating tiny newspapers WITH comics strips.  The angry birds are busy doing funny things in their stories, and the borrowers (a movie we’ve watched recently) are busy telling a story too.   These are multi-day comic strips.   He has news articles and ads and all sorts of things in them.  They are tiny as the lego characters must carry them around, and they are rolled up just as the newspapers are rolled up.  🙂  Every once in a while I get the question of “Mommy.. do you think they would write about this in the newspaper?”   My standard answer is “Sure, why not?  They write about all sorts of things.”

We were just about to start our homeschooling and hubby sent me this link.

That of course led us to look up where New Guinea was.

And to getting out the tape measure to we could see exactly how long 7.7 mm was (the size of the frog). Here is a recording of this little frogs mating call.

At breakfast, we did waffles as per the lad’s request, and then we did our normal reading

Today’s story was a lesson in not getting into things you aren’t supposed to.

Today we learned about how the viking age came to an end. We learned about the power of the living Lord God over the Viking gods and how that was instrumental in vikings becoming Christians.

Once we stopped being distracted, we worked on Studyladder. We studied the solar system, did math, did blending of CL and BL, and talked about kitchen safety and implements you use in the kitchen (did this by actually showing him things in the kitchen and demonstrated their use). 🙂 One of the things I like about StudyLadder is that I can offer variety. I can also take their ideas and use them as jumping off points.

As a reward for doing good work I let the boy child work on building yet another boat. He’s working on making a big ship with cannons using scraps from around the house.

at lunch we learned about this guy… a carnivorous caterpillar in Hawaii. 🙂

we also learned how tabasco sauce is made.

and then the rest of the day was free and clear for playing,working, helping, walking, and just being alive on a snowy, blustery day in Ontario.

Today we plan to go visit a friend and just have some play time/learning time and what not. 🙂

But the youngest needs to see the doctor so we are waiting for them to return.

In the meantime we went over to simple schooling which is doing 12 days of giveaways right now. WOOT WOOT! they have a study on Penguins! We didn’t get all the way through it, but what we got through was quite interesting. hopefully we’ll return to it early next week. 🙂

We did our normal reading.

He really liked today’s story. It was well written and inspired thought and brought a smile to his face.

We are into Roman history now. We continue to learn about gladiators.

he played fable with dad for a while as a reward for doing good work. 🙂

Then some playtime for a bit while I set up studyladder for him. I had planned that we would do some science, english and math. But we ended up doing a craft instead and learned where quality in what you get makes a difference. NOT all crayons are created equal. I need to post pics yet.

then off to his friends house. 🙂 helped his mom out with a couple things, sat and chatted. It was a good visit. 🙂 The lad had a whole lot of fun playing games and just being a lad with a friend. Good stuff.