You are here: Home / Faith / The Temple is Completed
Click here to go to my disclosure policy.

Yesterday we learned about the decree that Darius came up with in response to the letter sent him.  Today in Ezra 6:13-18.

13 Then, because of the decree King Darius had sent, Tattenai, governor of Trans-Euphrates, and Shethar-Bozenai and their associates carried it out with diligence. 14 So the elders of the Jews continued to build and prosper under the preaching of Haggai the prophet and Zechariah, a descendant of Iddo. They finished building the temple according to the command of the God of Israel and the decrees of Cyrus, Darius and Artaxerxes, kings of Persia. 15 The temple was completed on the third day of the month Adar, in the sixth year of the reign of King Darius.

16 Then the people of Israel—the priests, the Levites and the rest of the exiles—celebrated the dedication of the house of God with joy. 17 For the dedication of this house of God they offered a hundred bulls, two hundred rams, four hundred male lambs and, as a sin offering for all Israel, twelve male goats, one for each of the tribes of Israel. 18 And they installed the priests in their divisions and the Levites in their groups for the service of God at Jerusalem, according to what is written in the Book of Moses. 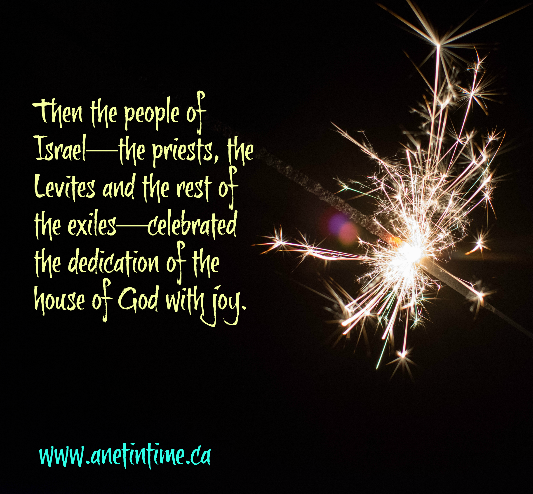 Tattenai and Shethar-Bozenai carried out the instructions that King Darius laid out in his decree.  We are told they did so with diligence.

To do something with diligence means that one engages in careful and persistent work or effort.

Therefore, these two men carefully and persistently engaged in the task that Darius set before them.  With the end result of that “the elders of the Jews continued to build and prosper under the preaching of Haggai the prophet and Zechariah, a descendant of Iddo.”  And WOOT WOOT…They finished building the temple according to the command of the God of Israel and the decrees of Cyrus, Darius and Artaxerxes, kings of Persia.

Can you imagine it?   FINALLY!   The temple is rebuilt!  I bet you can guess what happened next!   A huge party was thrown!  A dedication of the house of God was put on, and boy oh boy, it was a joyful time of celebration.  Not only was it a celebration, but they also offered sin offerings and installed the priests into their divisions, and the Levites into their groups so they could serve God as written in the Book of Moses.

They covered it all in one big ‘ole party!

Isn’t that the way it always is?  When you complete a work of the Lord, doesn’t a big party result?

Makes me wonder, are there tasks that we are failing to celebrate?  Are we starting to see it as silly if we celebrate a task completed for the Lord?  Are we failing to dedicate our completed tasks to the Lord?

I am thinking of how it’s a task God places in front of us, to raise children to know and love him, and if they are believers when they are adults, isn’t that something to celebrate?  To dedicate that young person to the Lord?  Or when a person finishes an important paper in school, or a job assignment or …. just fill in the blank.  How many of our tasks that God sets before us do we dedicate to him?

The celebrations in our lives don’t have to be huge, noisy affairs like the big celebrations of building a church or temple, or a graduation party, but those little tasks God gives us… are we dedicating them to the Lord as we finish them?   Aren’t they just as important?   Just has me wondering….

For the Lord Made Them Joyful
Darius' Decree