You are here: Home / Uncategorized / Today.. it’s the Letter U for blogging through the Alphabet.
Click here to go to my disclosure policy.

I don’t know about you, but I really remember that movie and need to show it to my lad sometime.  🙂

Now with that in mind.. I want you to think back to Canada turning 100 years and wanting to find a good way to commemorate it.

It’s two years before the first men even walked on the moon, years before images came back from Mars and what not.

BUT The government decided to do something you might think is a bit odd. They helped a small town in Alberta put up a UFO landing pad.  St. Paul was designated a centennial city.

Who thinks of putting in a UFO landing pad?   Only us creative Canadians.  🙂   (grinning widely here eh?)

It was put up (with no public funds being used) at a time when people were highly optimistic about space travel. Wouldn’t it be cool to explore space and possibly find alien species!?!?!?!

I found this image on TripAdvisor 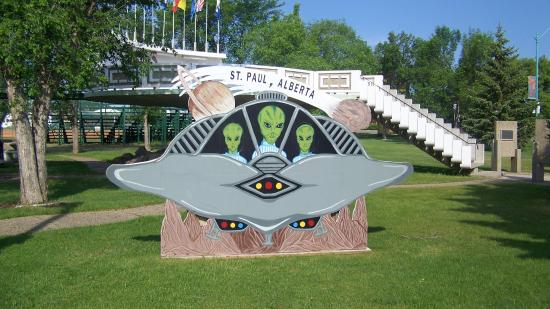 This photo of Ufo Landing Pad is courtesy of TripAdvisor

St. Paul, Alberta wanted to do something different from all the other towns around them as a drawing card.. no oversized food or furniture for them!   How about the world’s first UFO landing pad?   Make the aliens feel welcome yes?  And … if in welcoming aliens you made yourself a tourist attraction.. ALL THE BETTER!  (see this article).

Built as part of the Canadian centennial celebration in 1967, St. Paul,
Alberta has an official UFO landing welcome site. Weighing just over 130
tons, the large flat concrete structure contains a time capsule to be
opened on the 100-year anniversary of the pad’s opening in 2067. (source)

A large map of Canada has been made with stones that come from each of the provinces.  This map is found at the back of the pad.

This image below is from CTC News.

Check out this video of the Landing Pad. You may wish to shut your sound off unless you like music playing…

Anyways, I am so glad you joined me here today, I hope you will visit with Amanda as well and learn all about “Ugly”.  If you have an alphabet blogging post, do join in won’t you?

A Net In Time Schooling Blogging Through The Alphabet Grab Button Code: