You are here: Home / Uncategorized / Wizardry with the boys
Click here to go to my disclosure policy.

Friday we ended up getting sent home since we had a spell of high winds come through that threatened the lives of people.   We helped a vendor put their stuff away after working in the children’s tent for about 30 minutes. I had just enough time to mostly finish my wand.  We were given the instruction of “inspire others” so making a wand and chatting as we did so seemed a great way to do that. My son liked this quote so I snapped a pic.

On Saturday, our student and I went up.  Originally I had planned to go with the lad and our student on the Saturday but they miss-booked us and the lad had a cadets thing come up and couldn’t go.  So we worked with the miss-booking and went two days in a row.

Anyways, we were assigned to helping mind the gate but they had lots of volunteers there, instead we went to the non-alcoholic bar and served drinks, cookies and candied.   We were run off our feet but had a lot of fun!

We worked hard for an hour and a half and then needed food, and since I was working twice with a student we got a free lunch voucher.  The lines were horrible for the standard fries, pizza, burger places so we took a chance on a small place doing a perogi with chicken stew dish.  IT WAS FANTASTIC!  I need to learn how to make this it was so very good. 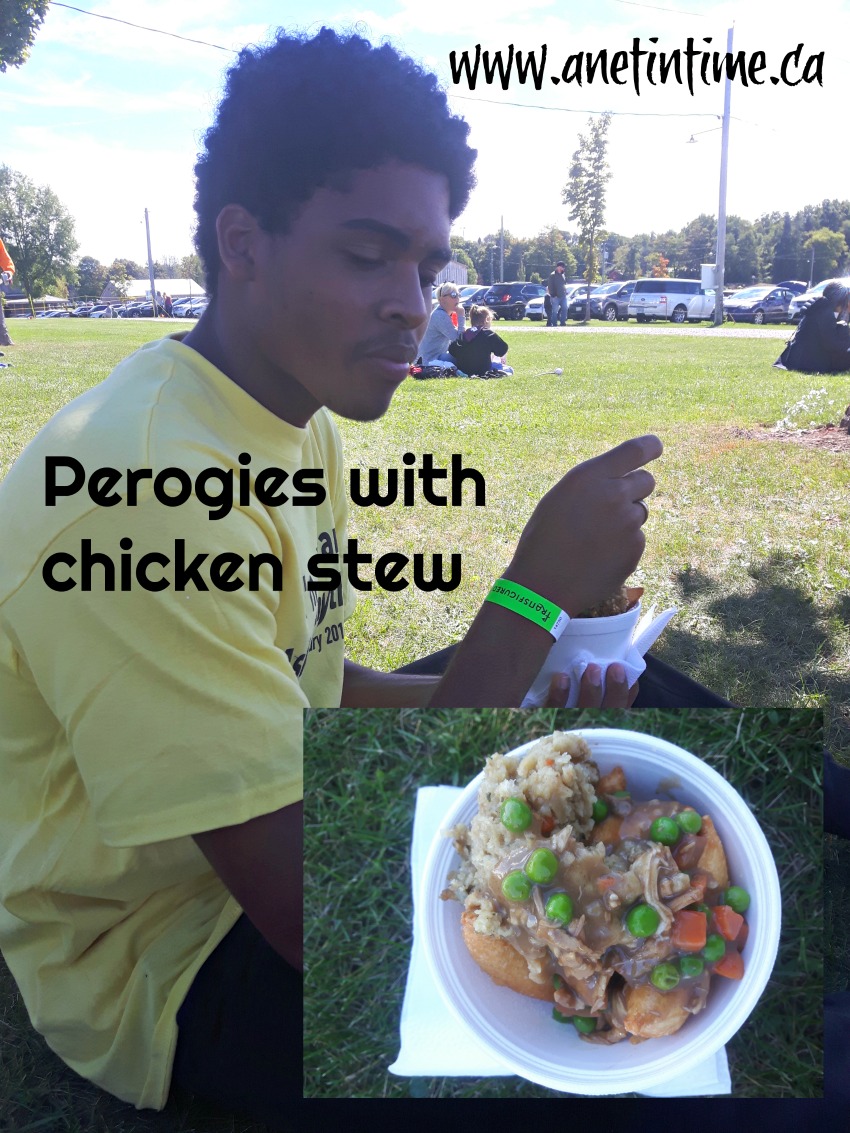 Back to work with a student who kept enjoying the caramel sauce.  I gave him fitz but he just grinned at me.  🙂  The ladies working with me grinned at him and told said “teens!”  🙂  So it was all good.  It was good to hear his attempted chatter and the ladies responding to him.  It was such a nice day.

The recipe we used for better beer “caramel sauce, cream soda, and real whipping cream”.   It tasted good but was very sweet. The cookies came in all house colours, glasses and sorting hat.  The glasses were very popular with families with multiple kids because they could break them in half easily.   YES, I bought some and brought them home for the guys.

Once 4 oclock came around we were done for the day so wandered around seeing what all was there.  I was tempted by honey, our student tempted by a neat ornament.  I had no money for things though (since I had bought cookies) so we just bought with our eyes.  I met a lady who wrote what looks like an interesting book so I talked to her about reviewing it.  🙂

We heard some noise so headed over to see what was going on and discovered a game of quidditch was going on…. a match between Toronto and Guelph. It’s an immensely confusing game…..

Just so you know… we learned that bacon flavoured cotton candy tastes good but wrong.  🙂   The vendor said it was a good seller combined with her maple flavour.  I told her I believed that but wasn’t brave enough to buy any.  I did take a sample stick home to hubby who liked it.  🙂  (I told her I thought he would).

That was our wizardry weekend.  SHOULD you ever be up this way in September of 2019, come join us at the Festival of Wizardry.  It’s a good time! Crafty Ideas from Junk
Love One Another