Born in Ireland, George Berkeley had a strong desire to found a seminary in Bermuda. He never achieved his end but he did serve within the church as Bishop of Cloyne.  He was an empiricist like John Locke, but he came to difference conclusions.

Like all empiricists, George Berkeley saw experience as the primary way to attain knowledge.   He decided that what we perceive are ideas not the things in and of themselves. This thought pattern is called: Everything is an idea and not a physical thing.

The progression of his thought goes as follows

It is not that he denies the existence of the external world but believes that the only way to gain knowledge is through experience, and experience comes only from our perceptions.  Since all our perceptions are merely ideas, we have no way to prove that anything more exists than ideas.

The question arises then.  If I stop observing things, or if I am no longer being perceived, do I disappear?   Berkeley’s response to this is that God perceives everything all the time.  Therefore, since God perceived things all the time, nothing ever disappears.

None of us though share the same mind, hence why people perceive the world around us differently.   My idea of what an pumpkin looks like isn’t exactly the same as how someone else sees a pumpkin, and definitely not the same way God would see that pumpkin.  So the only way that I know that something exists is if I personally see it, which means only I can cause changes to the physical world around me. Which means I need to have the idea to do so, and since I can’t come up with ideas on my own, I need to rely on someone who perceives everything.  Ergo I must rely on God (since he is the only one who can perceive everything) to supply with the idea to change the physical world around me.

Did he find truth?

Isn’t it interesting that Berkeley is aware of God’s eye being on us all the time.  That he perceives us all the time.  So a tree can fall in the forest (or a sparrow can lose a feather) God perceives, and therefore it happens.  And then the idea that everything is immaterial, only ideas, and it’s ideas supplied by God that change the world.  Isn’t that just a fascinating notion.

I see these ideas that Berkeley had and I think he is trying to show the dichotomy of faith.  As Christians we know that God knows everything.  He knows our past and our future.  He gives us freewill to act, but he also knows that actions we will take before we even know we are going to take them.  How does one truly explain this?  Is Berkeley somewhat close?   I don’t know.

In seeing the reliance we must have in God and how that would shape our perceptions of it, I see that as spot on.  Really.  Not necessarily the everything is an idea part, but that firm reliance on God to shape our thoughts, feelings and perceptions about that which is around us.   I find myself intrigued. I can see his struggle to understand it and to think deeply upon it.

To go to my worksheet on George Berkeley, click here or on the image below 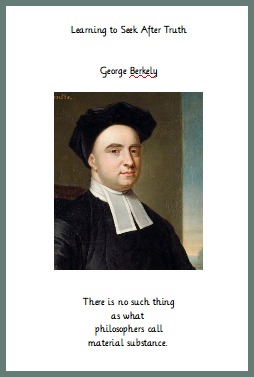