Lori and Wendy do a book club where they discuss a new book every month.  I thought it would be fun to join them (and did so last month with the book of negroes).

This month we looked at Miss Peregrine’s Home for Peculiar Children.   I have to admit, I almost decided not to join in, as my first introduction was the movie and I thought .. I’m not sure I want to read what I saw in the movie.  Some things in the movie just didn’t work for me all that well.  🙂

1. What effect did the photographs have on how you experienced this novel? In fact, what was your reading experience of Miss Peregrine’s Home for Peculiar Children? How did it make you feel? Were you disturbed…or fascinated…or something else?  Did the book hold your interest?

I thought the photos were interesting to view.  It didn’t bother me to look at them, it just raised questions in my head of….these look real, there must be an explanation to them, I wonder what it is.

I had a hard time separating how things went in the movie and how they were written in the book.

2. What’s wrong with Jacob Portman? What’s his problem?
As I read the book I didn’t think there was anything wrong with Jacob.  He was a kid who believed one thing about his grandpa, had his dad (over time) convince him Grandpa was a great storyteller, and then learned that Grandpa hadn’t been telling stories and he had to adjust to that truth and the truth of who he was.

3.
What about Abe Portman, what kind of character is he? What kind of a
world does he create in his stories for young Jacob? Why do the stories
intrigue Jacob so much?

Abe was a man caught between a rock and a hard place.  Knowing he had to stay in his own world and time and not be in the world of others.  Loving his family yet knowing he couldn’t be totally honest with them and never truly understood.

4. As he moves into adolescence, why does
Jacob begin to doubt the veracity of his grandfather’s stories? In what
way does he think they may be connected to Abe’s struggle under the
Nazis?
see the above.

5. What makes Jacob think his grandfather’s death is more sinister than what the official version claims.
Jacob saw something in the woods.  Something he knew to be real, yet it made no sense to anyone else.

6.
Talk about the house in Wales. When Jacob first lays eyes on it, he
observes that it “was no refuge from monsters, but a monster itself.”
Would you say the house serves as a setting to the story…or is its
role something else—a character, perhaps?

Hard one to answer.   I think it serves as a good opening point. A big let down, and then a point of excitement and conversation.

10. Talk, of course, about the peculiar children. Which of their oddities and personalities do you find most intriguing?

I thought the boy with the bees most intriguing.   To imagine having a whack of bees around you that can be peaceful or dangerous. I couldn’t see much use for the girl with the mouth behind her head… novelty yes, but then you can’t see what you are eating, there goes part of the joy of partaking in food.  Floating…wow.. HUGELY inconvenient most of the time I would think.

12. In what way can this book be
seen as a classic quest story—a young hero who undertakes a difficult
journey and is transformed in the process?

I saw it as a coming of age.  Of a boy realizing the truths of his childhood were also the truths of his maturity.  That was important for him to learn.  To take of the mantle of his family.  That is what maturity does.  Doesn’t always take the same form… should move a family forward… but needs, in some way, to be done.

13. Does the end
satisfy? Are loose ends tied up….or left hanging? This is the first
book of a planned series. Will you read future installments? Where do
you think Riggs will take his readers next?

I most likely will not read additional books.  I only managed to get 2/3’s of the way through this book.  Hubby read it and enjoyed it and would happily read more in the series.  I just couldn’t this month separate the movie from the book and have felt mentally distracted much of the month.

I will tell you right off the start that I sit here in amazement that Lori and Wendy were able to read this book in one month….took me three as I had to keep putting it down to let my thoughts and emotions take in what I was reading.

This is an emotionally intense well written book.   I first mentioned in this post.    LitLovers has given some questions to answer about this book which you can find here.   Not saying I’m going to answer them all either.   In Canada this book is published under the title Book Of Negroes

, in the states it is called “Someone knows my Name”. 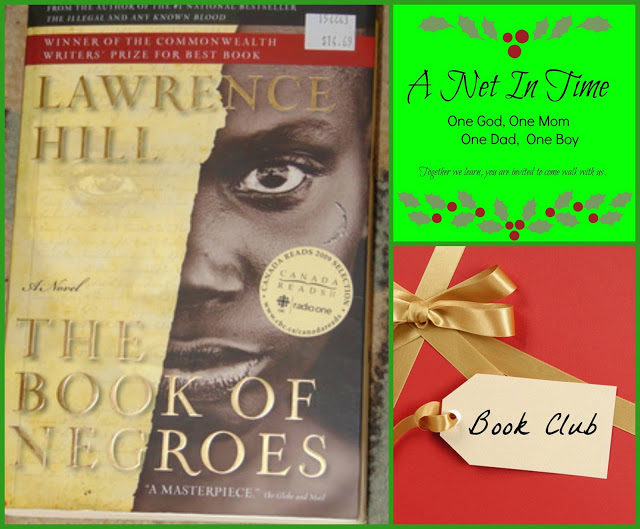 2. What is your opinion about Hill’s suggestion that Aminata’s very
youthfulness at the time of her abduction enables her emotional
survival, even as some of the adults in her world show signs of
crumbling?

Youth have a different take on things.   They are often more able to hunker down and deal with whatever is thrown at them.  Her youth also protected her from the advances of the men on board and gave her freedom to move around.   Most of the rest were simply kept in their area and expected to cope.  To go from complete freedom to being a messy, smelly, tight quarters on a ship with a never ending water line…that would be really hard for most adults to cope with.

3. The section of the book set in the sea islands of South Carolina
depicts eighteenth-century indigo plantations where African American
slaves and overseers are left largely to their own devices during the
“sick season”—a good half of the year. To what degree does this cultural
and social isolation allow for an interesting development and
interaction of African American characters in the novel?

4. Aminata suffers some horrifying cruelties at the hands of her
captors, but her relationships with her masters aren’t always what you’d
expect. How does Aminata’s story reveal the complex ways that people
react to unnatural, unequal relationships?

This fits with other things that I have read about slavery.  How some people formed good strong bonds with each other regardless of skin colour, whereas with others, skin colour was the defining issue on how they interacted with others.   I suspect though, the most cruel people, were also not nice to their white brethren either, having a tougher edge to them.  Nastiness attracts to each other.

5. During the course of the story, Aminata marries and has a family.
Although she is separated from them, she is reunited from time to time
with her husband and one of her children. What does the work tell us
about the nature of love and loyalty?

Love and loyalty hold true you know?   People work with the situations they find themselves in.  Take for instance military spouses who have to cope without their partner for days on end…their love doesn’t stop just because their partner isn’t physically with them.  Aminata’s situation was forced upon her, but that didn’t change the nature of her love for her man.

6. Aminata struggles to learn and master all sorts of systems of
communicating in the new world: black English, white English, and
Gullah, as well as understanding the uses of European money and maps.
How do her various coping mechanisms shed light on her character?

I think Aminata was an amazingly smart woman.  I think she would, given the proper education, outsmarted most people around her.   She used that brain of her to learn to talk like those around her, to assimilate the best she could into her environment.   Flexible but tough, smart but wise, just an amazing woman.

7. Aminata longs for her home. What is the meaning of home in the
novel, and how does the meaning change as the novel progresses?

Who wouldn’t long for their home, to go back to that safety and security?   People do that all the time.  Did you know that often children who grew up in the church and later left it, often when they marry and have children, find themselves drawn back to the church for the sake of their children?   They want their children to have that safety and security they had.   It’s good to go home, to want the love and security you had as a child.  Of course as you mature you figure out what home really is.   For me, as much as I long to be on a farm with a bunch of critters around me… home I’ve learned is where my hubby and son are.   They center me and are part of my security.   Aminata learns the same.  Her home is not just Africa, but where she feels the most secure.

8. What does the novel tell us about survival? Which characters fare best and why?

Survival… best done by those who can adapt to the circumstances they find themselves in.  Aminata did well, the lady who rescued her when she was so sick did well.  Finding a place, learning how to fit in and work within the system.   Learning to be tough and yet flexible.  This helps a person survive.

10. Aminata is a woman of extraordinary abilities—she is skillful
with languages, literate, a speedy learner, a born negotiator. Why did
Hill choose this story to be told by such a remarkable woman? What
effect do her abilities have on the shaping of the story?

Why?   To show there is always hope.  There is always something that can be done and worked with even through horrific situations.

12. What lessons does Aminata’s tale hold for us in today’s world?
Hard one to answer eh?  Today’s world is one of change and conflict.   Keeping one’s head down and hunkering in until you know the lay of the land is probably a good rule of thumb to live by.   It’s good though, to use your wits and your intelligence to learn the language and customs of the people you find yourself surrounded by and use that to make a way.

Being a person of faith though, you need more than just intelligence and wisdom to get by.   Faith gives a hope for things yet unseen.  Aminata has some hope that she will find her daughter, that she will find a place to truly call home.   She used her natural talents to good end.   Shouldn’t we all do the same?   Use your natural talents, keep your faith and just keep moving forward.

______________
So go on now… read the book club answers by  Lori and Wendy.   Perhaps next month you’ll join us with Miss Peregrines Home for Peculiar Children.