Isn’t it nice when you finish a book and you think to yourself… I’m glad I read that!   These Unlucky Stars left me feeling like that.  So glad that I took the time to read it through.  I’d love to tell you all about Gillian McDunn’s touching middle school novel.   Affiliate links will be used in this review.

Annie is such an unlucky girl, who has learned to keep people away, and yet… people keep intruding.   Can she learn to trust anyone?  To let a door into her life crack open… just a bit?  Enter into.. sticky situation.  What will Annie do?  And thus the story unfolds as Annie works to solve her problem and learns a few things along the way.

I loved seeing her heart…. Through all 288 pages, Gillian McDunn unwraps Annie’s character showing us her angst as she tries to do what is right, even when she knows she should have done better. Well-developed additional characters help to round out the story, each with their own struggles.   The whole community gathers around building a parade showcasing the rosy maple moth.

Published by Bloomsbury books, I am reviewing on behalf of Raincoast books.  I received an advanced readers copy.  Geared for middle school, it is being released as a hardcover.

BUT Annie makes an error in judgment… and solves the problem.  Therein we find Gloria and her weird dog.  And yes… the dog is a tad bit weird. But Gloria is interesting, and watching the relationship between Gloria and Annie (as an adult reader) develop is just fun.  Thinking as a middle school reader, I think kids would see themselves in the awkwardness between the two.  This is a fun book to read, there were times when I laughed aloud.  Thoroughly enjoyable.

I’m actually finding it hard to write this review because I enjoyed it and think most middle schoolers would as well.  It would be easy for them to see themselves in the story.  It’s hard to not tell you the whole story.

The characters were interesting, the back-stories made them so real. The way the community worked together and recognized the gifts of each other was heart-warming.  The struggles that Annie had are real ones, that could totally happen to any child.

There was artwork scattered throughout.  All was just roughed in since I received an ARC.  Annie is a young artist, and it is her artwork featured.

Should you get These Unlucky Stars?

Yes!  If you have middle schoolers who like to read real people stories where individuals their age solve problems in a realistic way.  Annie in These Unlucky Stars,  didn’t solve her problems in isolation, she had a community around her.  She needed to learn who to depend on and what errors in judgment she had made. Others around her also needed to learn this as well.  It was all-around well done and worthy of reading.   I would have liked to see more of the illustrations done so I could better tell you about them. I didn’t see anything objectionable within the covers.

one of the reasons I choose to homeschool is I simply enjoy having my boy around.  🙂   I like sharing his excitement in what he learns.
Yesterday while I was out doing some gardening I kept being interrupted by “mommy, come see this!”   So I’d trundle over to see what the lad had learned, done, accomplished, discovered and such forth.  Mind, I’d interrupt his play with “lad, can you come help me with….” and he’d come and help.  So turn about is fair play.
He was busy with a tub he’s put together that is half water, and part sand and dirt.   He worked quite hard at dividing it up so that water stayed on one side, and the dirt on another.
First he discovered what a water table is.
he dug down into various parts of his dirt section and learned that in most areas the dirt was damp but there was no water, but the closer he got to the water the more water there would be in the bottom of his hole.
Second he learned that doodle bugs (pill bugs) can float on a boat!     This made for marvellous story telling and laughter as we guessed what the pill bug thought of it all.
Then came the experiments with the pill bugs themselves.
If he made an island would they stay on it?
Can they swim?
What happens if you roll them into a ball and drop them in?
What happens if they land on their backs?
We discovered they can swim for short sections of time.
They float really well.
They can not climb when they are in the water.
The big ones are smarter than the little ones, and the middle sized ones just bolt without looking and land up in the water ALL THE TIME (the little ones moved more slowly and the big ones tested things out first).   It was actually quite interesting watching the big ones.  They’d move to various parts of the island and lean WAY down and take a good look at the water, and then come back up and trundle to a different section and test it out to.   BUT once they fell in, they would do it all the time so I”m not sure what was up with that.
The small ones and big ones stayed on the island the longest, and only the small ones would stay on the boat for any length of time. 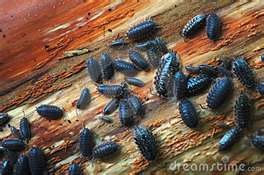 this picture came from this site.

no pill bugs were harmed in these experiments.  🙂

a while back we picked up a garden bugs of Ontario book.

I’ve learned over time it’s not exhaustive as we find LOTS Of bugs in the garden that aren’t in the book.

The lad caught this bug this morning and through searching the computer we were able to identify it. 🙂

he’s gotten curious about bugs since Renee’s children are into bugs and he’s discovering they are rather cool. 🙂